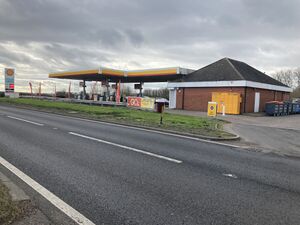 A46 northbound between Leicester and Newark

The main service area at Thrussington is on the northbound side of the A46, where there is a café and a petrol station. There is also a café and hotel on the southbound side, but these aren't regarded as a service area.

Short stay customer car parking is available. HGVs can access the forecourt, but no formal parking is provided.

The former Roadchef building, pictured in 2007.

Most of the history here is to be found on the southbound side of the A46. It was originally called Green Acres services, and even had a small Amoco petrol station.

In 1987, a Little Chef Lodge opened, which soon became a Travelodge. Little Chef, being part of Forte at the time, did look at building a new petrol station, but this didn't happen. The restuaraunt was one of many Little Chefs selected for closure in September 2012, but it has since become Jaanu Café and Restaurant. The Travelodge followed the Little Chef, with it closing in 2013, and it is now called OYO Sunrise Hotel.

On the northbound side, the forecourt was originally called North Hill Garage, and was a smaller facility next to two properties. In 1990, this was demolished and replaced by the current service station, known as Six Hill services. It was initially branded Elf, later Total, and has been Shell since November 2012. The café remains, and is a converted bungalow with parking in the back garden. In 1988 there was planning permission to replace it with a motel.

Six Hills Café was included in the Highways Agency's 2006 truckstop guide, where it was shown as having a café in the daytime, but parking for cars only. At night eight HGV parking spaces were made available.

A report in 2008 suggested that a number of southbound drivers were stopping in the lay-by and running across the road, even though according to the agents this is "not something to be encouraged".

A further proposal to replace the café with a hotel was refused in 2008, as the presence of the new service area at Leicester North was considered to offer enough facilities for the road.