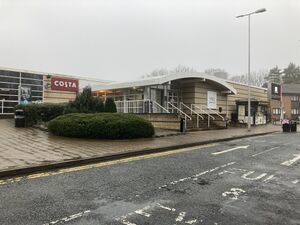 Scotch Corner is a small but very busy rest area for cars, positioned where the A1(M) meets the A66.

There is no parking for caravans or HGVs at the rest area, but on the other side of the junction there is a large lay-by used by HGVs for parking. Barton Lorry Park is slightly to the north, too.

First 2 hours free, after which cars must pay £15. There is no HGV or caravan parking available, coach parking is limited to two hours.

Prices are paid using PayByPhone. The location code is 2459. 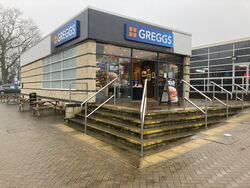 Scotch Corner has been an important road junction since before the motor era. The junction is one of the few historic waypoints to be a primary route destination in its own right, even though it has no permanent population.

When the A1 was upgraded to dual carriageway in the 1960s, a small roundabout was provided here. The old Dere Street, where the road had been re-aligned, became a lay-by with an AA patrol point. The Vintage Hotel was slightly to the west. To the south, the Crown & Anchor was now the Crown Farm Café, and there was a petrol station on either side of the new A1. One of these petrol stations was called Westside Garage.

In the mid-1970s, a new section of the A1 was built to the east of here, replacing the existing road either side of the old Scotch Corner Roundabout. This would ultimately spell the end for many of these facilities. For Top Rank, it was an opportunity: around four properties on Middleton Tyas Lane, known as Middleton Grange, were demolished to make way for their new service area.

The new Scotch Corner service area was tiny. It had a small amenity building with a small car park in front of it, and a small petrol station. Everything else: the extensions, the overflow car parks, the hotel and the coach park, were later additions, with the end of the car park in a separate field. It was the last service area to open without disabled toilet facilities.

While they had chosen a strategic location, Rank appeared to only have their eyes on the Little Chef-type of audience. The tiny original building is still there: it is the section of the modern building that is next to the A1(M), and is used as part of the deliveries bay. It claimed to offer the UK's first "drive in take away restaurant", which received praise. By the 1990s, that restaurant was branded Burger King, while Pavilion spent £750,000 refurbishing the restaurant area.

A Top Rank Motor Lodge opened in 1990, which became Pavilion Lodge, Granada Lodge and then Travelodge.

In later years, the Scotch Corner Hotel was purchased by the CHE Group and became Stop Inn. In 2009 the firm went into administration and the hotel was taken over by Compass. It is now owned by Holiday Inn. Meanwhile other facilities have been given a new lease of life. Part of the old A1 was a lay-by, but is now a weighbridge.

In the 1990s and early 2000s, Scotch Corner services had an uncertain future while plans to upgrade the A1 to motorway were discussed. Although the service area was unlikely to be in the way, at the time there was a limit on how many service areas could be signed from a motorway and given how small Scotch Corner is, it was likely that a rival would want to open up in a more flexible location on the new road. As a safeguard, Moto acquired the nearby lorry park at Barton Park, and they use it to provide the facilities Scotch Corner lacks.

In the event, no rivals materialised, and Moto chose to gradually refurbish Scotch Corner. They extended the front of the existing building to add M&S Simply Food and Greggs. The car parks were changed so that old Travelodge car park (also used by caravans) became the main car park, and what was left of the existing car park became an overflow facility.

Construction of the new A1(M) was completed in 2017, with Scotch Corner signed as a "rest area". It's not clear what facilities are missing to prevent it being regarded as a full service area; it may simply be to avoid confusion with the truckstop.

Moto proposed to upgrade the site to a full motorway service area in May 2021. This is part of a package of proposed improvements which includes building a new Costa by the entrance, installing six new electric vehicle charging points and reopening the Burger King drive thru. Scotch Corner would cater for cars, coaches and motorcycles, while road signs would advise other vehicles that additional facilities are available at a refurbished Barton Park. Northern Powergrid is also planning to increase the electricity capacity at Scotch Corner as part of the works, to allow it to potentially become a charging hub in the future.

Moto's urgency on the subject may be at least partly encouraged by the proposal for a rival service area at Catterick less than five miles to the south. Moto had argued that this would be unnecessary and threatened to launch a judicial review, but their August 2022 statement simply said that they would be investing in Scotch Corner.

The site was developed as a partnership between Top Rank and Esso, meaning that the petrol station has always been operated separately and would go on to have its own history. Esso sold their forecourt to Euro Garages in 2013.

Euro Garages retained Esso as their fuel supplier but added a SPAR store, Starbucks on the Go machine and in 2015 opened a Subway franchise. The Subway store later closed in late 2021 owing to poor trade.

EG Group intend to rebuild the forecourt and add a drive thru coffee shop soon.