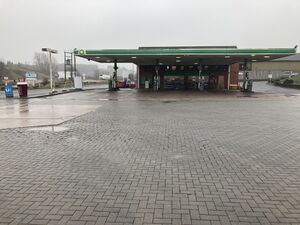 Although it's a truckstop with few facilities for families, there have always been a number of inconsistent and battered signs calling this place 'Barton Park services'. That may seem like an impossible dream, but Barton Park is sticking with it.

First 2 hours free for all vehicles, after which HGVs, caravans and motorhomes must pay £14 per 24 hour period. There is no long-term car parking or meal voucher option for HGVs.

Prices are paid in the forecourt shop. 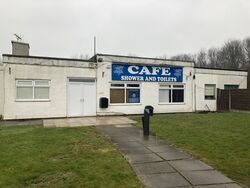 The former café building displaying Moto's only effort with the Poplar 2000 brand here.

This site includes a filling station next to a hill. The hill has a building which houses a café area, toilets and showers. Many signs, including one at the entrance, have a symbol suggesting there is a motel here: instead people wanting to stay the night are expected to remain in their vehicles.

The truckstop is built on the Barton Limestone Quarry, part of which is still in use today.

The A1(M) Darlington Bypass opened in 1965. By the early 1970s, there were records of the quarry site being used as a lorry park. There was also a long-running plan to build an American-style motel here, an ambition which ran from 1965 until 1977.

In 1989, there was a proposal to continue the A1(M) south of here, which led to the assumption that the nearby service area at Scotch Corner would have to close. This, coupled with the recent deregulation of the industry, prompted Barton Park Ltd to propose upgrading the lorry park to a motorway service area.

The motorway service area plan was approved in 1997, and carried forward until 2001 by Chartergate Estates Ltd. They used the name Great Northern services, and signed an agreement with the Highways Agency. Meanwhile, some road signs were placed on the A1 to advise lorry drivers (who can't use Scotch Corner) of the presence of the truckstop, though they called it "lorry services". This process is known as "co-signing".

The site was purchased by Mobil, and when they merged with BP it was managed by their corporate truckstop business. BP's business was sold to Nightowl Truckstops, who later went in to receivership. This site was then purchased by Moto.

As the owners of Scotch Corner, purchasing Barton Park meant that between the two Moto could now cater for all vehicle types. It also meant they would still have a presence even if Scotch Corner would have to close.

With the popularity of Moto's site at Lymm (previously named Poplar 2000), Moto began to apply some Poplar 2000 branding to Barton Park. This was soon stopped in favour of Moto corporate branding.

No progress was made with the Great Northern plan, with Moto blaming "uncertainty over the A1 upgrade". When the new truckstop at Coneygarth was proposed in 2012, Moto stated several times that building Great Northern service area was still their intention. They also suggested several possible outcomes, including co-signing Barton Park and Wetherby as lorry/car service areas respectively.

In the event, when the motorway opened in 2017, Scotch Corner was able to continue trading as normal, so the situation remains totally unchanged. As part of the project, many (but not all) of all the road signs referring to "Barton Park services" were changed to "Barton Park truckstop".

In 2020, Moto didn't rule out bringing the Great Northern motorway service area plan to fruition, but suggested that treating Barton Park and Scotch Corner as one item was "potentially a more sustainable solution". This became their formal proposal in May 2021, in which Scotch Corner would become a motorway service area that doesn't serve HGVs or caravans and Barton Park would be upgraded to meet modern truckstop standards.

The upgrade proposed for Barton Park includes a new Greggs, new truck wash, 50 car parking spaces (with a separate entrance), 5 electric car chargers, 9 caravan spaces and a 148 space park and ride service for Scotch Corner Designer Village. In addition, 100 HGV parking spaces would remain, which would be covered by CCTV and "secure". The road signs would all be replaced to meet current truckstop standards.