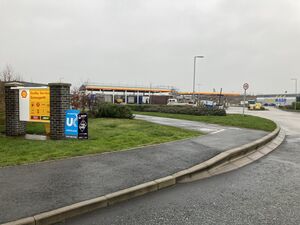 A new truckstop and service area development on the new length of the A1(M), although signposts will take you to the more distant Leeming Bar rest area. 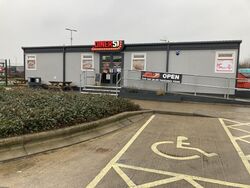 As of 2019 Ordnance Survey maps now mark Coneygarth the same as they mark any regular motorway service area. Some scales give it the same status as the official rest area at Leeming Bar, while others show Leeming Bar as merely a 'motel'.

Although Coneygarth isn't signed from the A1(M), there are already signs telling traffic to leave for Leeming Bar. At the roundabout, signs have been placed to direct traffic to the truckstop, saving the long detour down to Leeming.

Exelby Services' headquarters are also located at the site.

One of the world's first HGV hydrogen filling stations will be provided here by Element 2. Hydrogen-powered HGVs aren't currently used in the UK, but the truckstop is putting the infrastructure in place so that they could be.

When the new A1(M) was being planned to replace the A1 between Dishforth and Barton, it was clear the road was going to go from having many online services to having none.

This led to a long-running planning debate, which came to a head with a public inquiry that ran until 2012. Exelby Services, which used to run a truckstop near Londonderry, were planning to move to a large truckstop at Fairfield Farm.

The inquiry concluded that Leeming Bar should be the main motorway service area, but that there was also a need for a truckstop, and Coneygarth could become one. It did not enter into a signing agreement to be signed from the new road, with the Highways Agency giving preference to Leeming Bar, but some signs have now been placed at the junction.

Although the proposed truckstop was being weighed up against official service areas, throughout the process Exelby were clear that they had no plans for the new truckstop to be signed from the new motorway. There are still no signs on the main A1(M), but some have been placed on the slip roads.

The café here was originally due to open in early 2015. Plans for a café were instead submitted to the local authority in summer 2016, and 'Diner 51' opened on 9 January 2017.

In late 2018 the store changed to Londis as part of Exelby's new partnership with the brand.

An additional 45 parking spaces were added to the north of the filling station in October 2020 in a new overflow parking area.