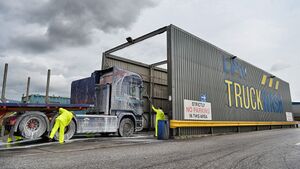 LPW Truckwash provided a truck washing facility at a number of Moto service areas. They were part of the LPW Group, who provide support facilities to the haulage industry. It bought out rival Alpine Cleaning Services, a service used by Welcome Break, and merged the two businesses.

Away from motorway services, LPW continue to operate at a number of truckstops and other sites near major roads.

LPW Truckwash can be found at the following official service areas:

LPW Truckwash used to be found at the following services: