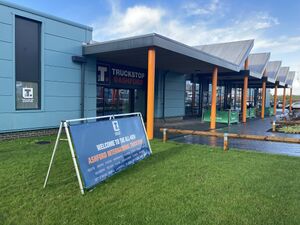 A dedicated truckstop built close to the M20 as it approaches Folkestone, rebuilt in 2021.

Trailer changeovers are charged at £39.50 per trailer.

Prices are paid in the amenity building or by booking a space via the MyTruckParking website. 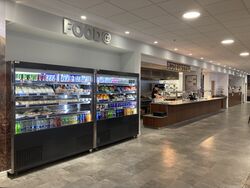 Ashford International Truckstop is one of the largest truckstops in the south-east of England, and calls itself the 'main truckstop for the Port of Dover'.

The truckstop was developed as part of Waterbrook Park, first proposed in 1990. It opened in 1994 (matching the opening of the Eurotunnel terminal) and featured a large amenity building providing a restaurant, shop and showers and Elf fuel facilities. A LPW Truck Wash was added to the forecourt in 1999.

The site was acquired by GSE Waterbrook Ltd in 2004 who significantly expanded the facilities available, including a gym and laundry facilities. Parking security was also improved with high fenced parking areas, CCTV and security patrols.

The forecourt had been re-branded Total. This had closed and been demolished in 2016, becoming a dedicated parking area for haulage firm Waberer's.

The truckstop was voted 'Britain's Best Truckstop' in 2016 by Truckstop News.

During 2018, planning permission was granted to GSE Waterbrook and Cedarvale and CC Projects to redevelop the entire area. The project, known as the 'Ashford Great Park Partnership', included a new 650-space truckstop with new amenity building to the north-east of the current facilities.

The wider project included plans for a new residential development with up to 400 homes, 8.9 hectares of employment space including a superstore, two drive-thru restaurants and car showrooms and a number of new business units.

Work commenced on the new truckstop and business units in late 2018 with the new truckstop officially opening on 7 December 2021, following three open days. The new facilities included all the features of the existing facilities alongside new on-site accommodation, games room and NomadPower electric charging hook-ups for refrigerated trucks. A dedicated minibus was provided between the existing facilities and the new site.