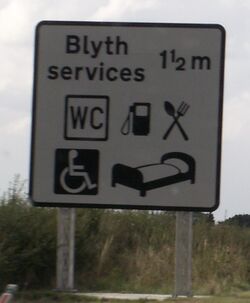 An example of a road sign provided under a TSA.

A Traffic Signs Agreement (TSA) is a formal agreement between an operator and a highway authority, usually National Highways.

The agreement allows road signs to be placed advising motorists that there is a service area ahead, which helps drivers find the service area and tells them what facilities will be available. In return, the operator needs to agree to cover the costs of installing the signs, and to provide the basic standard of facility which is required of that type of service area.

The agreement will usually confirm the name of the service area, and the location of all the new and amended road signs. Although a TSA is signed with an operator, it applies to the site, and remains valid if that site is sold to another operator. The records also aren't updated when signs move, but the operator is required to keep the signs updated if the information changes.

While this is a useful agreement to have, the TSA was actually created to tackle a legal issue: motorways are not allowed to provide access to private businesses, but an exception was made for places with a TSA. Without that exception, motorway service areas couldn't exist.

TSAs were created for use on English trunk roads. It's not clear whether a similar system is used by other highway authorities; it's unlikely that they would want the hassle.

Recently Highways England, who are well-known for their love of renaming things, started calling it a SHTSA (Strategic Highway Traffic Signs Agreement) instead; Highways England have since changed their own name.

According to the regulations, if a service area fails to provide what it is expected to, then the TSA becomes invalid and the road signs must be taken down. If this is a motorway where the exit only serves a service area, then that exit is required to be closed too.

In practice, an extreme response like that is never taken. A blind eye is usually turned to temporary issues. One restaurant operator told us about a fight he was having to get Highways England to take the signs down, because he wasn't providing the advertised facilities and didn't want to mislead people. Taking down road signs can involve an expensive road closure, so nobody will offer to do it when they don't need to.

In theory, "Services" signs shouldn't be erected without a Traffic Signs Agreement, but exceptions are frequently made. Usually, this is because they use the "generic description of a facility" clause, but there will also be cases where a well-meaning highway authorities put extra signs up to be helpful. There will probably be some cases of very old signs that keep being updated with nobody checking whether the place actually qualifies.

England's national highway authority (under its various renamings) has consulted this website for a list of service areas at least three times, rather than trying to find the Traffic Signs Agreements they've signed. Motorway Services Online would like to list every service area with a valid TSA, but with the system being so muddled, we can only list the places which look like they ought to have one.

Increasingly, some developers are choosing to build service areas next to junctions and not apply for a TSA, on the basis that online listings and word-of-mouth offer all the same benefits, without the expense or responsibility of TSAs.