No photos tagged with Catterick. If you have one, why not upload it?

Catterick services is a new proposal from Roadchef which went public in June 2019, and received planning permission in July 2022.

It is to be built at the Catterick exit on the brand new section of the A1(M) motorway, which opened in 2017. A £57m investment, it would be built on land which had been primed for development, with an exit at the roundabout already in existence.

Roadchef have called it "the most important project in Roadchef’s development". The firm has said it would pay almost £2m to create wildlife habitats elsewhere, and a new cycle path would be provided to Catterick village.

The A1(M) is notorious for its lack of service areas, especially if, as the planning documents do, you ignore the presence of Ferrybridge for its long detour and Scotch Corner for being a rest area. If you followed that logic, you would have found that there is a 60 mile gap between existing service areas. 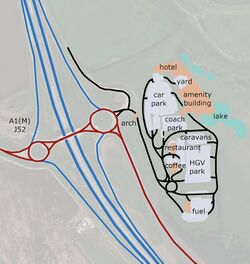 The proposed service area would be unusual and unique for several reasons. Firstly, according to Roadchef, it would have the usual offer of Costa, Leon, McDonald's, WHSmith and Days Inn, but it would also have an on-site farm shop selling local produce. This would be the first service area to combine a farm shop, made famous by Tebay, with some famous brand names.

The main building would have the hotel at the north end, a delivery yard in the middle, and the main facilities to the south. Most of the building would be covered with a green roof - a style made famous by Gloucester. At the far southern end would be a terrace overlooking a lake, with a path looping around the building. The western end would be saved for a possible extension, doubling up as a dog walking area. A dedicated pathway would be provided for people arriving by bike.

The main exit from the car park would pass the entrance to the building. To avoid a congested crossing, the road would instead dip under the entrance - the sort-of idea not seen since the '60s - but this would be a lot wider and more stylish. The front of the building would be covered with a stone cladding. A special gateway arch would cover the main entry road.

If the motorway service area was built, Richmondshire District Council had suggested they would their lorry park in nearby Colburn, as they had received some complaints about that location.

Unusually for such a large development, this proposal did have the support of the local parish council, although many residents did argue that the facility wasn't needed, or would do unacceptable environmental damage, or that it would be dangerous or historically damaging because it's built on a former quarry.

Richmondshire District Council's planning office was set to recommend the scheme be approved in July 2021, but the decision was postponed repeatedly until July 2022.

Moto objected to the proposal on the basis that it affects their neighbouring sites, and threatened to trigger a judicial review. Competition in this area will intensify as Welcome Break have also been awarded planning permission for a new service area 21 miles away at Kirby Hill. Moto's August 2022 statement suggested that they wouldn't be fighting the approved Catterick, but would face up to it by improving their facilities.

Roadchef also have a planning application at Selby.