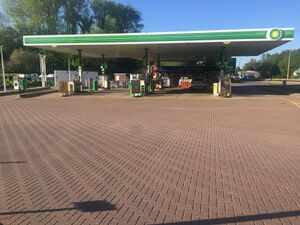 A11 northbound before Fiveways Roundabout

The little Milford forecourt comes immediately before the big Fiveways Roundabout, on the A11 northbound.

The road signs state that no HGV access is permitted, even though HGV fuel is advertised. 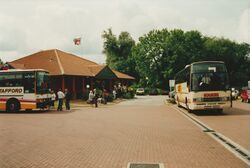 Coaches parked outside the Milford AJ's restaurant in 1993.

The Milford forecourt - its name referring to the mill nearby - was built in the 1960s.

After the A11 was upgraded to a dual carriageway in 1986, the site soon gained an AJ's Family Restaurant. At the time the forecourt was branded Fina, who called it Milford services.

The AJ's was broken into on 31 August 1992 when thieves forced entry into the building and stole £400, the contents of a gaming machine and keys for the restaurant.

The AJ's became the Barton Mills North branch of Little ChefHistory in 1998. It was a partner to the Little Chef on the opposite side of the road, called Barton Mills South.

At one point, the Little Chef gained a takeaway service. The restaurant closed in February 2012 as part of Little Chef's major cutbacks, with this site chosen no-doubt because there was another one over the road. The building was purchased by Corsey UK in 2015 and became home to the Pancake and Waffle Shack, which closed due to financial issues on 6 July 2022.

Five Guys are seeking planning permission to adapt the empty restaurant building, which could lead to their first facility at a service area.