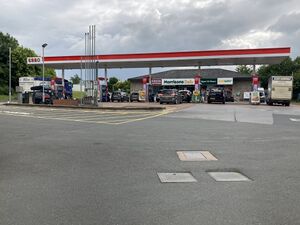 The first service area after the motorway, positioned at what used to be the Merrymeet Roundabout.

Parking and use of the forecourt is limited to 20 minutes maximum stay and is strictly enforced. 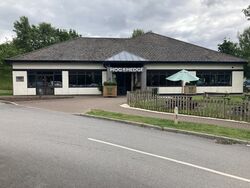 The Hog and Hedge restaurant, situated in the former Little Chef building.

The service area was developed by Forte and opened in autumn 1995 with an Esso filling station, Travelodge hotel and the Whiddon Down branch of Little ChefHistory, and was built on the original alignment of the A386 next to a property called Merrymeet. The old road layout now runs through the middle of the car park.

The Little Chef restaurant went onto gain a Coffee Tempo! concession and then Little Chef Express.

The Little Chef closed in October 2014 and was later purchased by an independent owner. The restaurant later reopened as Hog & Hedge.

Around the same time, the filling station was acquired by Rontec who added their Shop'N Drive store and replaced the On the Run café with a Subway store. Rontec later rebranded the store to SPAR. In June 2021, the store was rebranded to Morrisons Daily.