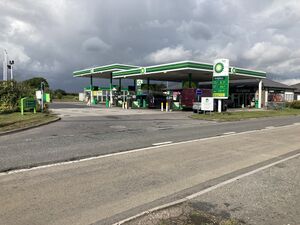 This service area is based on the former White House Transport Cafe, dating back to the 1930s, but has since been completely re-built. 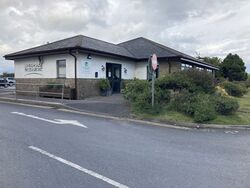 The service area was originally home to the White House Transport Café and truckstop which itself replaced Ivy Cottage. It is positioned on the original alignment of the A30, which happens to be next to a junction with the new road.

Trusthouse Forte planned to build a filling station and restaurant here In 1987, but planning permission was refused. A subsequent plan in 1988 proposed just the restaurant but these plans were also refused. The truckstop eventually gained fuel facilities in 1989.

Over the winter of 1992, the truckstop café and recently added fuel facilities were demolished and replaced with a new BP forecourt and restaurant building opening in early 1993.

The filling station used to include a Premier store. This became Budgens in the early 2010s before becoming Nisa Local in 2015. The store was rebranded back to Budgens in July 2020.

A new car park was added next to the existing restaurant in 2010, with an overflow area for use in the summer.