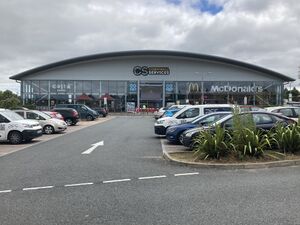 A30 at Victoria, Roche
(also accessible to traffic on the B3274)

This page is about a service station called Cornwall. Other services in Cornwall can be found in the relevant sections of the A30 and A38 pages.

Cornwall's largest service area is so big, it takes the name of the entire country. It's a new development taking advantage of the big summer peaks.

Hotel guests must give their vehicle registration number at reception to receive free parking during their stay.

Prices can be paid using the pay machines located in each car park. These fees are strictly enforced by Smart Parking.

This isn't the first time that this area had been earmarked for a new service area. In 1976, plans for a caravan park including a filling station and hotel here were refused.

After the A30 bypass of Victoria was built in the early 2000s, a Little ChefHistory and petrol station in the town (known as 'Mid Cornwall services') received a significant drop in trade. To make up for it, a large service area was proposed at the junction with the new road.

Outline plans for the current service area were put forward in 2007. The original layout of the site had the entrance to the site in the north-west corner with HGV, caravan and coach parking areas the first to be met at the south end of the site. Between the HGV and caravan parking areas was the main road which continued to a roundabout at the centre of the site: to the left of the roundabout was the filling station, exit straight ahead and car parking, amenity building and hotel to the right.

The amenity building was originally set to include a Burger King, Tourist Information Centre and 2 additional drive-thru lanes but these were all scrapped. It had been called Cornish Gateway services, but opened as Cornwall services.

The original plans called the site On the left side of the amenity building, space had been left for two drive-thru lanes.

An external unit was added outside the amenity building, which opened on 8 July 2016 as a craft hut called Woody's. The external unit was later taken over by Teddy Freddy's Barber Hut who opened in October 2019.

MRH were acquired by MFG in 2018. MFG intended to rebrand the forecourt shop to Budgens in summer 2019, with 'Budgens opening soon' signs on the store for a time, but this plan was dropped in favour of a Londis. The Londis then received a minor refurbishment in April 2022 with a number of new grab and go options being added to the store.

Construction started on a Holiday Inn Express hotel in 2019, which was due to open on 29 February 2020 but was pushed back to April 2020. It was then further delayed by the COVID-19 pandemic, eventually opening its doors on 4 July 2020.

The coronavirus pandemic also resulted in the closure of Cornish Kitchen, which closed permanently in March 2020. Cornwall's only Greggs store replaced it in October 2020.

A Costa Drive Thru was added at the back of the services in August 2020, adjacent to the HGV parking area.

On 3 January 2021, the Clip n' Climb section of Indoor Active was removed, being replaced by a Co-op Food store which opened on 18 March 2021. Following the success of the store, the WHSmith store closed and was replaced by the Mountain Warehouse on 19 April 2022.

Construction is currently underway on a GRIDSERVE electric vehicle charging hub, at the bottom of the car park, which is set to open in late 2022.