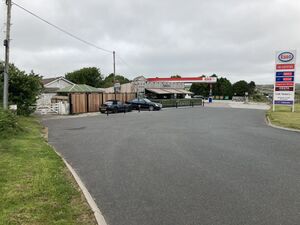 A30 between Launceston and Bodmin

A service station next to the eastbound side of the newly-dualled A30. The site is now signposted and accessible in both directions thanks to the new bridges.

Overnight parking is available at £14 per night.

Prices are paid in the forecourt shop, and can be paid using GBP or SNAP. 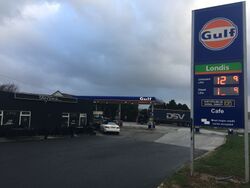 Gulf branding next to the café, pictured in 2019.

The service area was built as a garage providing Esso fuel facilities in the early 1950s, with a bungalow called Robrosa. The garage gained a snack bar in 1957.

Plans emerged in 1966 to demolish the sales building and snack bar replacing them with a larger building. This didn't happen and in 1967, an extension to the existing building was built instead. There were also plans to add a café and accommodation to the site in 1966 too but this was refused planning permission.

The forecourt canopy was added in 1974, alongside a new café positioned where it is today. The forecourt went onto become a Shell site in the 1980s, gaining a Spar Express store in 2009. The café later became the Penlan Eating House, but this closed in August 2012 following health and safety issues.

Following the closure of the café, the site was sold and rebranded to Gulf with a Londis store for a short period of time before, becoming an own-brand shop. The café also reopened, becoming known as Tanya's. It then rebranded the site back to Esso in summer 2019, with the shop gaining a Costa Express machine.