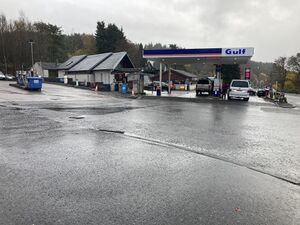 In the UK the Gulf brand is used under licence (from US owners) by GB Oils (owned by the DCC Group), also the owners of FloGas LPG suppliers. GB Oils purchased the brand and distribution business from the Bayford Group in 2010.

Bayford also brought 30 Elf forecourts from Total at the time of merger, mostly sites in Yorkshire.

Gulf are one of the few government licensed companies to sell Leaded Petrol (4 Star).

Gulf used to be found at these signposted service areas: