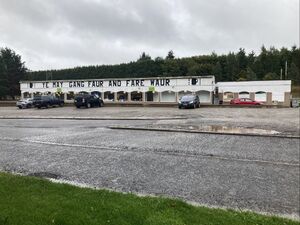 A90 between Brechin and Stonehaven

Close to Stracathro Hospital is this independent service area.

First 2 hours free for all vehicles, after which cars must pay £1 and HGVs, caravans and motorhomes can pay £5 or £25 to include a £20 food voucher.

Prices are paid in the forecourt shop.

The fees are strictly enforced by Stracathro Services. 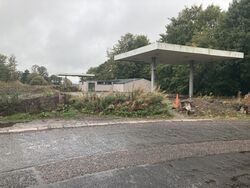 The original filling station from the old A94 is now abandoned.

In an era where the country's main roads are saturated with big-name restaurants, this unbranded restaurant which continues to trade with a more traditional menu stands out as an anomaly.

The service area here started out life as a hen house in the 1950s on what was the single carriageway A94.

The distinctive restaurant building was built in woodland at the entrance to Clearbank House in the 1960s. On both sides of the building reads "Ye may gang faur and fare waur", which loosely translates to "you can go far afield and not be assured of finding anything this good". It is much larger than a typical roadside diner, with the usual flat roof, but with evidence of Art Deco inspiration in the rounded windows.

A petrol station was built to the west of here on land which was left over from the old alignment of the A94.

When the A94 was upgraded in the 1990s, it was moved on to a new alignment to the south of here. The new Stracathro Junction provided access to the old service area as well as the hospital. The new road created a strip of unused land in between the old and the new, which allowed more parking to be provided.

The old petrol station soon closed, and the owners of the site built a new BP filling station closer to the new junction, next door to the restaurant building, placing all the facilities together. The old filling station is now derelict, positioned off its own roundabout at the end of the road. The roundabout features a milestone in the centre of it, detailing the distance to Brechin.

The BP forecourt was later rebranded to Shell. Their policy of charging high prices for fuel meant that the main identification sign would normally be left blank, leaving motorists to discover the price only once they had parked up. The site rebranded again to Gulf between 2010 and 2015. The forecourt is now unbranded, and instead displays the name Strath Catharach - the Gaelic translation for Stracathro.

Plans were put forward in 1998 to build a 60-bed hotel next to the old filling station, but this didn't happen. These plans resurfaced in 2013, with additional proposals to demolish the derelict forecourt and replace it with a garden centre. This was renewed in 2017, but the idea has been left dormant.