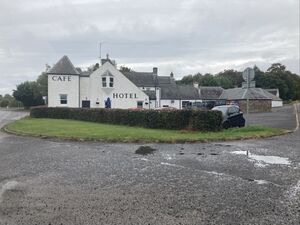 Two separate buildings at one service area: the hotel is accessible in both directions via a gap in the central barrier, while Peggy Scott's Restaurant exits to the northbound side only.

Short stay customer parking is available for cars at both facilities, with 2 coach bays also available at Peggy Scott's restaurant.

No long term or overnight parking is available. 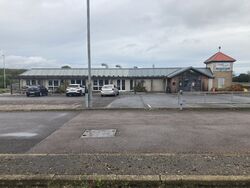 This is another service area which has had a junction built around it. Originally it was positioned at a staggered crossroads junction on what was called the A94, with a petrol station that was built in the late 1970s. It had been branded Texaco and later Esso, but it was closed and demolished in the mid-1990s.

The Finavon Hotel was the ancient Red Lion Hotel/Inn. It has a pub-food menu, and now competes with the main diner.

A building called Woodside became JG's Diner, named after its owners. JG's had a sister restaurant at Inchture. JG's Diner shared a building with a filling station and its shop. When the other facilities closed, Peggy Scott bought the diner and demolished it. The diner was replaced and reopened in 2003 as Peggy Scott's.

The new building lies just to the north of the old one and once had an exit lane onto the road alongside the hotel, but this has since been closed off and turned into additional parking. The building received a large extension in 2009, which saw the restaurant move into the new extension and the original part of the building become a SPAR Express store. The SPAR Express store was removed in late 2017 and became a gift shop selling local produce and Scottish gifts.

The diner currently holds planning permission to install four electric vehicle charging points within their car park. It is also seeking to build a drive thru facility.