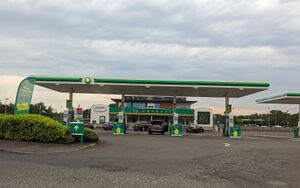 A92 at Bankhead Roundabout
(also accessible to traffic on the B921)

Bankhead Park, which is the edge of an industrial estate on the outskirts of Glenrothes, offers a service area for traffic on the A92.

No formal HGV parking is available, although HGVs do park on the surrounding roads.

The land here was originally used as part of the Eastfield Industrial Estate. Following the dualling of the A92 through Glenrothes, the land closest to the Bankhead roundabout was rezoned for use as a service area with the land being broken up into a number of plots. The site became known as Bankhead Park.

A number of proposals were put forward by Scot Sheridan Developments for the plots of land with the first coming in 2001 for a filling station and a drive-thru restaurant and another in 2003 for a 3-storey 50-bed hotel. These facilities were eventually built and opened in 2005 as a BP forecourt and a Travelodge hotel. The forecourt went onto gain M&S Simply Food branding in 2007.

A standalone restaurant was also built opposite the filling station and opened around the same time. This was originally home to Wok'n Spice and later became Beijing Banquet in the mid-2010s.