A720 at the Dreghorn exit

A coffee shop and service area positioned on the Edinburgh City Bypass at the Dreghorn Link junction.

Parking in the shared Starbucks and Travelodge car park is limited to 2 hours maximum stay and guests of the hotel must register their vehicle registration number with reception in order to gain free parking during their stay.

These restrictions are strictly enforced by APCOA Parking. 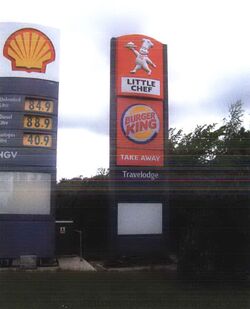 The services was first opened in 1989/90 by Forte, as part of the completion of the Edinburgh City Bypass. It offered a filling station, a Little ChefHistory and a Travelodge. In addition to the standard signing, a local farmer was paid to advertise the services from the road.

Forte added Scotland's only Coffee Stop to the Little Chef. With Granada taking over Forte, they extended the restaurant to add a Burger King in place of the Coffee Stop. This closed in the mid-2000s.

On 30 December 2013, the Dreghorn Little Chef was closed. The building remained empty but the ceiling inside of the restaurant had been drilled as part of a survey.

During Spring 2016, the former Little Chef building was refurbished by Euro Garages, and on 27 April 2016 they opened a Starbucks here. The store was Euro Garages' 60th Starbucks store to open, their second in Scotland, and was officially opened by local MP Colin Beattie. There had been plans for a Subway to join the Starbucks café however this was later withdrawn.

The forecourt underwent a major refurbishment in July 2016. It reopened on 11 November 2016 with new pumps and an extended sales building.