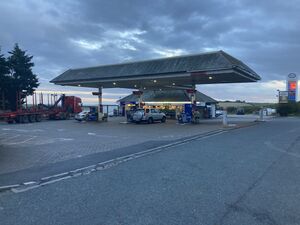 A1 between Alnwick and Berwick-upon-Tweed

The turning for Holy Island offers the last official service station in England. 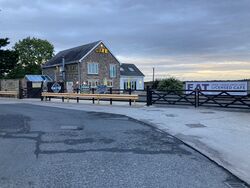 The Eat and Sleep cafe and bunkhouse.

This is an important crossroads on the A1, called West Mains. The first facilities to arrive were the Plough Inn (Halfway House) and a school. Next to it the Beal garage was built, which became the full service station.

Since the 1970s, the garage was independently owned and operated and was branded BP. The garage and adjoining bungalow were demolished in 1990 to become the filling station we see today. There were also plans to add a restaurant and 26-bed hotel to the site at the same time however this never happened.

The site was sold to Shell in 1998. By 2002, Shell had sold the site to Penny Petroleum who had rebranded the site to Texaco.

By 2008, the site had been sold to The Bayford Group who ran the site under the Gulf brand with a Mace branded store. In 2010, they rebranded the store to Londis.

By 2016, Penny Petroleum had regained the site. They later rebranded it to Esso in 2018.