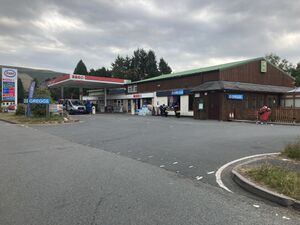 A470 between Builth Wells and Rhayader

The contemporary Euro Garages line-up, found in a much older building on the A470. 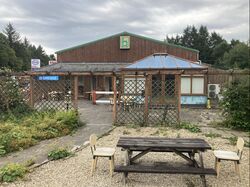 The former Halt Café is now a Greggs.

The Vulcan Lodge, positioned immediately to the south, was the main hotel serving Doldowlod railway station, which closed in 1962. The name "halt" derives from this.

The hotel had a new lease of life when the new A470 opened in the 1970s. A petrol station was built next to the hotel, which would become the main service area that is recognised by the highway authority.

The petrol station was formerly branded Texaco, with a post office and shop called The Halt Store, and an attached café called The Halt Café. The shop rebranded to Mace in 2010.

By 2015, the petrol station, which was under the ownership of High Noon Stores, was branded Gulf, and the shop was branded SPAR. The café was known as The Halt, taking a more American diner theme rather than that of a traditional café.

After High Noon Stores collapsed in 2017, it was taken over by Euro Garages. They rebranded the forecourt to Esso, and turned the café into a Greggs store. There is still some "Halt" branding on the building.