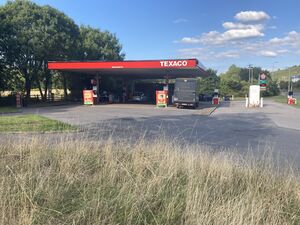 A470 northbound near Abercynon

A small service area as the A470 passes Abercynon.

The restaurant building in 2019, as Juboraj.

The service area opened in early 1986, shortly after the completion of the A470 Abercynon bypass, with a Little ChefHistory restaurant operated by Trusthouse Forte and a BP filling station operated by White Dove Motor Services. The service area was known as Expressway Service Station.

The forecourt was sold to Fuel Express in 2004 who rebranded the site to Texaco. Following the takeover, the site became known as Abercynon Service Station.

Fuel Express submitted plans in 2006 to extend the forecourt shop, adding a cafe and children's play area, but these were later scaled back and the store became a Costcutter in 2008.

Fuel Express were acquired by Murco in 2011, who themselves were then acquired by MFG in September 2014. Following the acquisition, MFG rebranded the site back to Texaco before rebranding the store to Londis in 2017.

MFG currently hold planning permission to add two jet wash bays to their forecourt. Planning permission has also been submitted to turn the former restaurant building into a Starbucks Drive Thru, re-utilising the existing building by adding a drive-thru lane around the outside. The plans also include provisions for six electric vehicle charging bays.