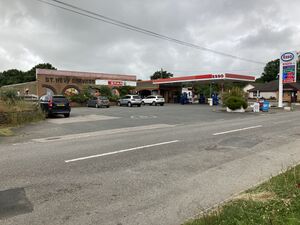 A39 between Camelford and Wadebridge

A sudden rush of facilities is offered at St Kew, in the middle of the otherwise spartan A39. 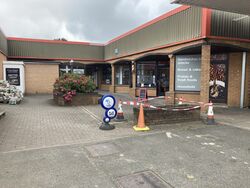 The units to rent, with only two occupied.

The official name of the area is St Kew Highway, which appears to be named after the road which passes the nearby village of St Kew. The exit here is the original route of the A39, which took a sharper bend later on.

A garage and bungalow were built here in the early 1950s, which gained fuel facilities in the mid-1950s. In 1987, the existing bungalow and shop were demolished and replaced with the buildings here today - a large local store with 5 separate retail units.

Fuel has been provided by Jet and Gulf. Unusually, the services had two stores; an own-brand store and a Costcutter/Post Office, before the own-brand store closed in January 2017. High Noon Stores purchased the site for £1.4 million in 2016 and replaced the Costcutter store with a SPAR store.

Euro Garages purchased this site along with three others on 24 February 2017 from High Noon Stores, and it partially reopened on 10 March 2017. It was fully reopened in early April 2017 removing the Post Office in the process and adding a refurbished SPAR store and a new Subway unit situated inside the SPAR store. The Subway unit has since closed.

EG Group are now seeking to demolish the existing facilities, and replace them with a new forecourt. The new forecourt will have 10 parking spaces and one food unit. Following the news of these plans, and due to the owner's age, Aunt Avice's Pasty Shop closed for the final time on 31 October 2022 after trading for 22 years at the site.