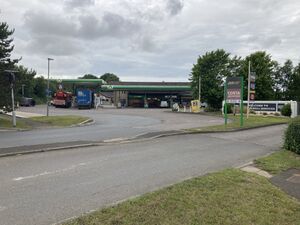 A typical A-road service area set up located near to the start of the Atlantic Highway.

Plans for a service area here date back to the early 1990s with the first plans emerging in 1991 for a petrol station with car wash, restaurant and hotel. A BP filling station was built and opened in 1992 by local business owners H A Malek & Partners. They later added a Wimpy restaurant in 1994. It then took over 10 years for the planned hotel to finally emerge with a Travelodge hotel opening in 2006.

In 2007, the Wimpy restaurant was converted into a KFC Drive Thru.

The local business owners also own a Wimpy franchise in the centre of Barnstaple and used billboards located around the filling station to promote it.

The Subway store here used to be open 24 hours for a time. There is still some signage visible around the site now inaccurately advertising this.

H A Malek & Partners sold their businesses here on 26 March 2021, with the forecourt being acquired by SGN Retail and the KFC restaurant being acquired by EG Group. Following the takeover, SGN rebranded the SPAR store to Nisa Local and added a number of new grab and go options. A Revolution Self Service Launderette was also added to the forecourt. The advertising billboards for the Malek's Wimpy restaurant were also removed.