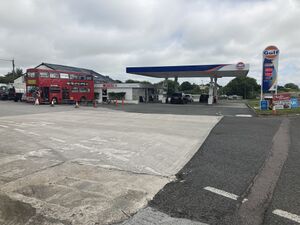 A30 eastbound between Launceston and Bodmin

The forecourt at Trewint had been abandoned since the 2000s, but it reopened in June 2021. 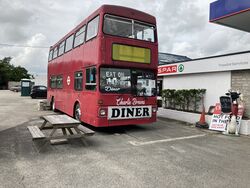 The diner on the bus.

There are records of Trewint Garage going back to 1949, when it was positioned on the old, single carriageway A30. It became derelict in the 2000s. The sales shop was a converted dwelling, and a converted bus trades in the car park as a takeaway and sit-down diner. There had been plans to add a restaurant, toilets and picnic area in 1988.

The wider site is much larger, and has been used as HGV parking in the past, where it was advertised as 'Trewint Truck Stop'. The main building was also a 13 bedroom hotel.

The landowners came forward in early 2020, saying they still had a licence to operate the petrol station and wanted to bring it back into use. Highways England were keen to see the facility reopened, and had been hostile to past suggestions that the land could be redeveloped for other purposes, as they wanted another service area to take the pressure off Bodmin Moor. They had some reservations about how such a constrained site could fit a modern forecourt.

The site reopened in June 2021 with Gulf branding and a SPAR store. There are plans for the site to gain an AdBlue bunker as well as two electric vehicle chargers.