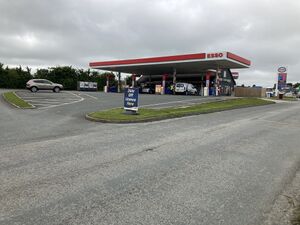 A small service area at Plusha. It is accessible in both directions but only signposted westbound as the right turn is hazardous.

Prices can be paid via the RingGo app using location code 21507.

These fees are strictly enforced by Smart Parking. 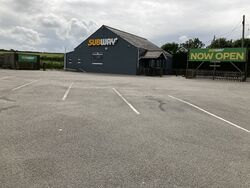 Subway in the one of the former garage buildings.

The road through the service area is the old alignment of the A30, which was cut off at the end by the new. There used to be an exit to the A30 at the far western end of the car park, which was closed when the dual carriageway was extended.

This service area started out as a couple of garages and a small petrol station next to Moor End bungalow in the mid-1950s. It was redeveloped in 1990 with a new forecourt being built to the far west of the site, in the position that it is today. This redevelopment introduced new parking areas for both cars and HGVs. There were also plans for the former garage building to become a restaurant, tourist information centre and hotel but that didn't happen.

New plans for a restaurant, tourist information centre and hotel were eventually granted planning permission 1995, but ultimately weren't built. The former garage building was finally converted to become Antheas Country Cafe in 1997. This was sold in 2008, when it became a Subway store.

Throughout the 2000s, the filling was branded BP with a SPAR store and operated by Chartman Retail. The filling station was rebranded to Esso in the early 2010s.

The filling station was acquired by MFG in 2019. They changed the shop to Budgens in the following year.

There is an ongoing planning application looking to build two drive thru restaurants on the current HGV parking area between the Subway store and the existing filling station. Highways England have raised concerns about anything that will encourage traffic to turn across the A30, adding that in the long term they were hoping to upgrade the junction.

Meanwhile MFG were granted planning permission to demolish the existing shop building and build a larger one in February 2020. The works will also include the installation of 4 electric vehicle charging points and new parking bays located around the building.