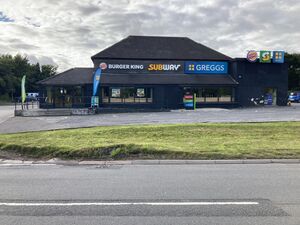 One of the busiest services in the region, Sourton Cross has a familiar service area next to a picnic area and transport café.

Overnight free parking is available for all vehicles at the Sourton Cross picnic area, limited to 24 hours maximum stay. These restrictions are strictly enforced by National Highways. 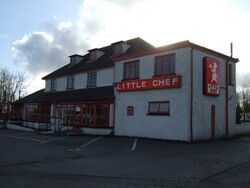 The Little Chef at Sourton Cross, pictured in 2013.

The history of Sourton Cross starts with the Roebuck Hotel on the old A30 which is thought to have been built in the 1940s. The building was purchased by Forte in 1986, and they turned it into the Sourton Cross branch of Little ChefHistory, as well as providing a new filling station to the west, with fuel being provided by Shell.

Forte added a Little Chef Lodge to the east of the restaurant in early 1988 - this soon became a Forte Travelodge. The Little Chef went onto gain a Burger King franchise in the late 1990s.

The Little Chef was forced to close when new owners Euro Garages lost the rights to the name in January 2018, with the restaurant becoming EG Diner. Both this and the Burger King then closed at the end of September 2018 with the Burger King reopening that December alongside new Greggs and Subway stores.

The service area was also joined by a Highways Agency-operated picnic area, positioned opposite the main facilities with its own toilets and parking for all vehicles. A sign at the entrance breaks down the different facilities available, making clear that the less visible picnic area is also the main parking area.

The picnic area later gained its own catering facilities in the form of a portable building next to the toilets. This was known as Woody's Diner, but it closed in early 2020 with the portable building being sold off at an auction. A snack bar now sits on the space where the portable building was. This parking area is still maintained by England's national highway authority despite their various renamings.