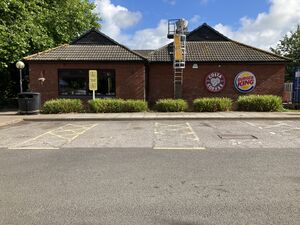 Signposted from the road? From A361 only

A very small service area, designed for traffic on the A38. It is not signed from the M5 but it is directly accessible from J27.

There are no facilities available for HGVs, caravans, coaches or motorhomes at this service area (though some do try to park on the road outside it anyway).

First 2 hours free for all vehicles, after which cars must pay £6. Season ticket parking is available. There is no parking for HGVs, caravans, coaches or motorhomes.

Prices are paid in the restaurant or using PayByPhone. The location code is 2468. 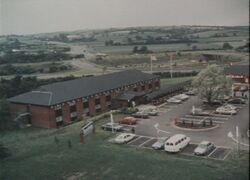 This service area frequently charges car parking charges less than a fraction of the price of other Moto sites. Even allowing for the fact that it isn't officially a motorway service area, it's still remarkably cheap. This value could be a result of Tiverton Parkway railway station being positioned nearby, but the two aren't easy to walk between.

There is a pair of bus stops outside the entrance to the service area, which receive a regular service. As of 2022, NaPTAN (which is the source of most journey planning services and bus stop announcements), still calls both bus stops "Little Chef".

Leonard Moor Farm was demolished when the motorway was built, leaving only the adjacent Leonard Moor House. In 1978 Farmhouse Inns Ltd wanted to turn this into a restaurant and accommodation.

Eventually the whole site was demolished and in 1986 Forte opened one of their small Little Chef-branded service areas, which consisted of a Little Chef restaurant, a Little Chef Lodge and the forecourt. This setup was officially known as Sampford Peverell services, but Little Chef generally marketed it as 'Tiverton', which stuck.

The restaurant gained a Coffee Stop, and a tourist information centre was soon built next to the restaurant. The Little Chef Lodge was changed to the main Travelodge brand.

In 1993, Forte suggested filling in the gap between the Little Chef and the tourist information centre, creating one large building. A new coach park, caravan park and overflow car park would have been built to the east of the site, with the local road diverting around it. Access would have been provided from a new roundabout on the A38. Forte withdrew the plan.

Department of Transport records state that they signed an agreement in 1994 to signpost the upgraded Tiverton services from the M5. This would be later renewed.

Forte's properties were acquired by Granada in 1996. Granada added a Burger King to the restaurant and kept working on the expansion plans.

In 2000, planning permission was granted for motorway service areas both here at Tiverton (although they called it 'Burlescombe') and at Cullompton. Highways Agency policy would only allow one of these to be signposted from the motorway, so they reached a compromise: Cullompton would be signed from the M5 northbound, and Tiverton from the M5 southbound. This would mean only the east side of M5 J27 would need to be given traffic lights.

At this point Granada became Moto, who inherited the plans. The plan Moto came up with would have taken the existing Little Chef, and expanded it westwards. The two restaurants would have stayed where they were, with a new entrance by the Burger King, leading to a walkway past the game arcade to the shop. The toilets would have been by the side of the shop, and a new seating area to the side of those, with Caffè Ritazza and Upper Crust stands, joining to the existing Little Chef seating area. New parking areas would have been provided, with an entrance from a new roundabout on the A38 and an exit to a diverted path of the existing country lane. This plan was approved.

Another proposal was put forward in 2005. This kept a similar external layout, but both the Little Chef and the tourist information buildings would have been demolished. The new building would have been shaped like a shed, with timber cladding and glass over the entrances at each end. Inside there would have been a Burger King, a shop, a game arcade and toilets, with offices on the upstairs balcony. This plan was approved but wasn't built.

Moto replaced the Little Chef with Costa in 2008, a change they were making across their estate. The tourist information centre was closed.

Another operator attempted to build a full motorway service area opposite the junction in 2009. Their aim was to create a gateway to Mid Devon called 'Junction 27'. The plan had to be scaled down to just a rest area as the existing service area complained it would take traffic from their site, even though the developer claimed they were after different markets and that the existing service area could even benefit from the increased traffic. The two sites would have been connected.

These plans were later rejected altogether with the local authority saying they weren't interested in what they called a "half-measure", adding that they wanted something bigger to relieve congestion at Cullompton.

The filling station here was branded and operated by Shell. This arrangement remained until 2019 when Moto bought the forecourt from Shell and rebranded it to their standard partner brand, BP. This is now the first time since the service area opened that the site is now owned and operated by one sole owner.