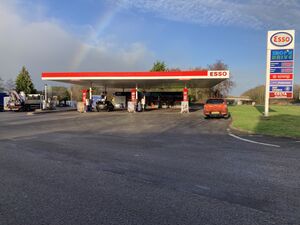 A petrol station and Indian restaurant on the northbound side of the A483. 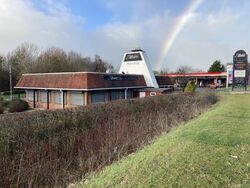 The service area was built by Norfolk House Group in 1989. It opened with a Kelly's Kitchen restaurant and Petrofina filling station. This was one of only a few sites that they built that weren't next to a roundabout.

The restaurant quickly became a Little Chef following their acquisition of Kelly's Kitchen, but it was a short-lived branch that closed in 1993, owing to competition from existing nearby branches. The building later became home to an Indian restaurant called Khazana before becoming Maahis in 2013.

The forecourt went on to become a Total forecourt with a Mace store. Following Total's nationwide shutdown in 2012, the site was sold to Rontec who rebranded it to Esso and added their own-brand Shop'N Drive store, as well as a new jet wash.