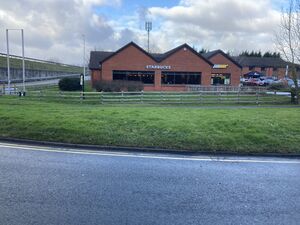 A former Little Chef site on the Wrexham bypass.

First 2 hours free for all vehicles, after which hotel guests must pay £4 and other vehicles £7. No HGV parking is available.

Prices can be paid at the pay and display machines in each parking area or via the APCOA Connect app using location code 4124 (or 9143 for hotel guests).

Fees are strictly enforced by APCOA.

During the 1980s, the Welsh Government majorly upgraded the A483 around this area to dual carriageway to bypass Wrexham town centre. As part of this, a service area was built at the new junction 3 at Rhostyllen. This opened with an Esso filling station and the Wrexham branch of Little ChefHistory in 1987. This was then joined by a Little Chef Lodge a year later in 1988 which later went onto become a Travelodge during the 1990s.

Following the Forte takeover of Little Chef during the mid-1990s, the site then gained a Burger King restaurant in an extension to the existing restaurant building. This later closed in around 2007.

The Little Chef restaurant continued to trade until July 2012 when it was deemed as an underperforming site by R Capital and closed. The building was later acquired by Euro Garages in 2013 who added a Starbucks store in the former Little Chef space and a Subway franchise in the former Burger King space.