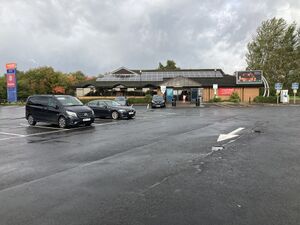 M74 southbound between J4 and J5

Prices are paid using NexusPay or in the shop. The location code is 2239. 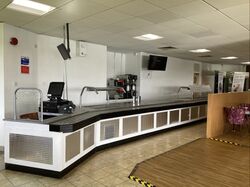 When they opened, Bothwell and Hamilton were treated administratively as if they were one service area. On this website their two names mean they are each counted individually.

With 97 parking spaces, this is officially Roadchef's smallest car park, and possibly the smallest of all the major motorway service areas.

When the M74 was widened in 2017, to save space it was decided that the new lane wouldn't continue through the service area. This means Bothwell is one of only two service areas in the UK to have its own dedicated lane from the motorway, and the only one to have a dedicated lane gained afterwards - an odd decision given its relatively low use.

The land was designated for use as a service area when the M74 opened in 1966. A very large plot of land was allocated, as the Scottish government were keen to avoid the overcrowding problems that the early English motorway service areas had encountered.

Bids were received from two developers, of which Highway Restaurants Ltd (which consisted of Blue Star and Trust Houses) won. The Department for Transport laid the roads out (including 50 HGV spaces and 10 coach bays), but Trust Houses pulled out their support leaving Blue Star to run it on their own. A revised financial offer was accepted in December 1967.

Blue Star reported "severe financial difficulty", and cancelled the project in August 1969. This left the Scottish Development Department with a half-built service station that was too far advanced to give up on, even though that was tempting. A new round of bids was opened for Bothwell in August 1972, and no responses were received at all.

The Scottish government went back to 15 potential operators, and received four responses from Trusthouse Forte, Westmorland, Granada and Galleon. Operators would now be allowed to sell one brand of fuel, but the government would no longer be involved in site maintenance. The Granada proposal's 200-seat café was too big, and would clearly be unused. Westmorland would have had a 150-seat café, and Trusthouse Forte proposed a 104-seat café and an 88-seat restaurant.

"This is the best offer we have been able to realise"
Scottish Development Department, 1973

They took up the Galleon offer, which would be branded 'Roadchef'. Roadchef wanted it to be as cheap and easy to build as possible. They built a largely glass, 120-seat self-service café with an orange and cream colour scheme. They said this was combining the best elements of other service areas, creating a modern site. 12 toilets were provided. Financially, the Scottish Development Department accepted that this was a "poor return" compared with what had originally been envisaged.

Roadchef confirmed it was designed with long-distance traffic heading across Scotland in mind, with drivers being encouraged to park up for the night and make their way by taxi to hotels in nearby towns. Bothwell opened on 27 June 1975, although an official opening event was held on 22 September 1975, which was attended by the Scottish Lorry Driver of the Year. Fuel was provided by Texaco, with the forecourt operated by Roadchef.

In 1977, Egon Ronay rated the service area as "appalling", calling its operation "very casual". It had "a dirty stained carpet and smoke-stained ceiling", "rude staff" and poor food. By 1978, Bothwell had been described as "the worst in Britain" for its poor design and heavy vandalism. The building was soon replaced by a less flimsy-looking structure in a new position. Fuel would now be branded BP.

In the 1980s, Roadchef built a number of service areas that later closed. The new Bothwell was built at that time and, with its small size and minimal changes, it gives us a good idea what the other sites would have looked like.

Bothwell's original design catered for demand that didn't really exist. The road is not used by much long-distance traffic, but by commuters who's journeys start or end nearby. As a result, Bothwell is usually last in line to receive any investment, and it has missed out on many nationwide refurbishments over the years. It is possibly the UK's most forgotten service area.

A hotel was advertised as opening in 1992, but it was never built.

Inside it is very quiet. In 2006, Holiday Which? gave the services a 1/5. They described it as "dreary and cluttered", and its toilets received no marks at all. Roadchef responded to the review by saying that "it isn't the most damning of criticisms".

Besides the troubled history set out above, in 2009 Roadchef were in financial difficulties and gave serious consideration to selling Bothwell.

Bothwell was supposed to undergo a multi-million pound refurbishment in 2014, bringing it in line with other Roadchef service areas areas which were gaining McDonald's and new dining areas. This didn't happen, and Bothwell is still the only Roadchef service station without a McDonald's. The Restbite restaurant became the last buffet-style servery at a big-name motorway service area.

The forecourt was sold to Euro Garages in early 2017, as Roadchef was removing fuel from their business model. It was rebranded from BP to Shell at this time. As Roadchef's facilities close at night, it creates an unusual situation where the main operator is only involved on a part-time basis.

Planning permission for a Costa Drive Thru here was granted in 2017, but this later expired in 2020. The large grounds here would make a drive thru easy to construct.

In April 2020, Bothwell became the only motorway service area in the country to regularly shut down at night, due to staffing difficulties with Roadchef and EG Group associated with the COVID-19 outbreak. The Restbite restaurant opted to close during the first lockdown, and did not reopen, leaving Costa as the main restaurant option.

Planning permission has now been secured for a two-storey, stand-alone, McDonald's drive thru to be built outside the main building. While it will be operated by Roadchef, it may pull even more trade away from the original building, creating the unusual situation where the ancillary building is busier than the main one.

Sebastiano's was added to the car park in September 2021, situated in an outdoor catering trailer, but this later closed due to financial issues.