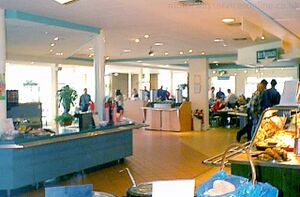 Foodfayre was Roadchef's self-branded restaurant, used during the 1990s. It was a fairly bland affair, with pale blue furniture, and large, clear signage.

It used a buffet counter, which was divided into sections called Spaghetti Junction, Pizza Pasta and the Hot Range.

Foodfayre was paired up with Roadchef's coffee brand, Cafe Continental. The pair became onRoute and Costa Coffee as part of a catering refurbishment carried out at the start of the 2000s.

Prior to Foodfayre, Roadchef's restaurant in the 1980s was called Orchards. This had a green theme. It was sometimes joined by waitress service restaurant Hickory's, or truck driver's café Juggernauts. Orchards was themed like a country kitchen. Breakfast and juice cost £3.95.

One report, dated 1992, stated that Roadchef's restaurants sold an English breakfast with tea or coffee for £4.85. There was a 'healthy eating' section with salads, roast chicken, quiche and quiche that cost £4.99. A pot of their British Tea Council award-winning tea cost 80p, and the average main meal cost £4.35.

Foodfayre used to be found at: