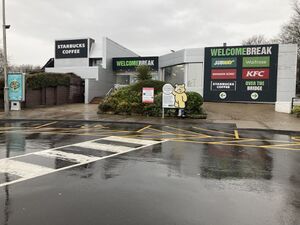 As the M62 descends from the Pennines into densely built-up West Yorkshire, Hartshead Moor is literally a transfer from the highlands to the lowlands.

Despite many motorists imagining that this part of the M62 is very rural, it's in fact very busy, with four lanes and two interchanges close by. For reasons that aren't clear, the eastern approach to the service area is extremely well signed.

The location may not have been ideal, but it was chosen simply because it was the first suitable piece of land that could be used for a service area after Birch. A large plot of land was needed as there would be a larger-than-standard gap between the two.

The 32 acre location was approved in 1967, but a major gas line and geological faults caused issues. A land zoning plan was issued to bidders, with parts of the site reserved for planting. It was suggested that buildings be built at the north end, to get the best views.

West Riding County Council pushed for the service area to be on one side of the road only, with a bridge between the two. This was deemed to be excessive. They then suggested the planned Methley services could provide the other half, which would have increased the gap from Birch. The Ministry said they were "thoroughly unhappy" about this, calling the insistence that Hartshead Moor be single-sided "unnecessary".

The westbound restaurant was opened to the press on 22 May 1973, as part of celebrations of the completion of the M62. The rest of the facilities were phased in until 5 July 1973.

The parking layout was designed to minimise the incline for large vehicles. It allowed for 346 cars, 161 lorries and 15 coaches. The restaurant sat 600 people in total across the public and transport cafés, with large windows making the most of the view to the south west.

It was one of the first services to open without any steps. As a sign of the attitude towards accessibility at the time, this was thought to be remarkable.

Taverna were allowed to bid for these services despite owning Woolley Edge, as little traffic was thought to be making that journey. The chosen design was created by the same architects who had worked on the original Killington Lake.

Egon Ronay rated the service area as "poor" in 1976, noting it was fairly clean but for the stained carpet. A 1978 government review described the services as "scruffy". But by their 1986 survey, Which? praised the services as an example of attractive design work, with real plants inside and decent seating. They recommended it again in 1991.

Under the original Welcome Break's ownership, Hartshead Moor was apparently known for its special menu promotions, including a Greek themed season.

A mobile tourist information centre and a greenhouse were among the facilities available in the 1990s. A Little Chef Lodge had been approved to be built in 1988, it was then proposed again as a Travelodge which was refused for its design which was said to be unsympathetic to the local environment. It was built some time later and is now the Days Inn.

The service area received considerable media attention in 2022, after the eastbound side came last in the 2022 Transport Focus public satisfaction survey, though it still scored 80% satisfaction. The westbound side didn't fare much better, scoring 87% but only coming 105th. The Guardian was one of many to report on the story, where they visited and concluded it was "all right", a pretty good review for the supposed worst in the country. 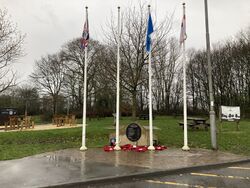 The service area is notable for the plaque and memorial garden outside the westbound service area. It commemorates members of the armed forces and their families who were killed when a device planted on their coach detonated four miles east of Hartshead Moor.

The attack, which happened on 4 February 1974, was described as "the worst IRA outrage on the British mainland". The westbound building at Hartshead Moor played an important role in coordinating the emergency response, so its entrance hall was chosen as the location for a plaque.

Over time, the building became busier and nosier, and concern was raised that it wasn't a suitable location for the memorial. Welcome Break agreed, and on 4 February 2009 a new memorial garden opened at the back of the building. Positioned with four flag poles, it includes an English oak tree, a memorial stone, a memorial plaque and a raised marble tablet inscribed with the names of those who died. This was joined by an Army Medical Services memorial on 1 September 2013.

More information on the attack can be found at the BBC.