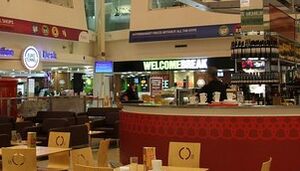 In 2007, Welcome Break won a contract to provide facilities in the UK Eurotunnel Departures Terminal. This page deals with that facility only, not the whole terminal itself. 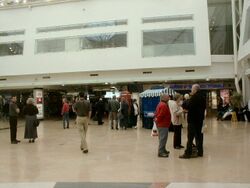 The Little Chef logo on display in the unit which was later taken over by Welcome Break.

Welcome Break signed up to the contract to see how well they would do away from the motorway. They initially said the operation was a great success, and that they were considering other places they could introduce their facilities to widen the appeal of their brand. In particular, they were interested in the French Eurotunnel Terminal.

Their facilities consisted of Welcome Break's usual catering offer for the time, within a unit of the main passenger terminal building. The branding Welcome Break Truckers was provided at the freight terminal.

In August 2013, the contract expired and all of Welcome Break's facilities were removed from the Eurotunnel Terminal.

Previously, this unit had been occupied by a 'Food Village', consisting of Burger King, Little Chef Express and Pret A Manger. At the time Little Chef had just been sold by Compass (a spin-off of Granada), who may have put these three together.

This wasn't Welcome Break's first venture into this market. In the early 1990s they took on a similar catering building nearby at Dover Port, but this contract was lost when the company was sold.