Formerly and idyllically known as Gretna Green, this is the first service area you'll pass as you head in to Scotland on the A74(M). 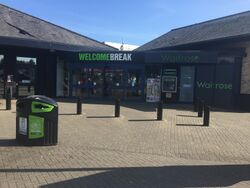 The service area has open access to the B7076. This and the road layout in the area means that it is often treated as an unofficial junction for local road users. It's a hangover from the original road layout on the A74.

The correct number for the road that Gretna is on - A74(M) - is rather fiddly and has never really caught on. Most resources, including Welcome Break's official website, will usually say that Gretna is on the "M74" or "A74". Road signs within the service area used to direct traffic back to the "M74", and one of the official motorway signs still calls it that.

During April 2017, the filling station was sold by BP Express to MRH. MRH later merged with MFG who added a Londis store and four IONITY electric vehicle charging points in 2020.

Originally Gretna was a pair of petrol stations staggered across the A74. There was a flyover between them, which provided access to each side of the road and the road to Springfield.

Forte built a large amenity building here on the northbound side, with a Little ChefHistory, The Granary restaurant, and the country's first Little Chef Lodge.

The hotel was rebuilt in 1985, where it was used to help relaunch the Little Chef Lodge brand. A further launch event was held on 29 January 1987, where the Scottish Tourist Board chairman Alan Devereux arrived on an ancient Stagecoach, with officials from Forte and local schoolchildren. The hotel became a Travelodge in 1989.

In 1992 this section of the A74 was replaced by a motorway. Strictly speaking only the southbound filling station was affected by this, and a new junction provided access to the old facilities. However, the old facilities were outdated, too small, and not in an ideal position.

As a result, Forte knocked down the old facilities and spent £6 million building a new forecourt, hotel and amenity building on a larger, 26 acre section of land, roughly occupying the same area. New signs were erected pointing to the "Accom. and services", while other sources called the place 'Gretna', even though publicity continued to call it by its full name for some time.

During construction, the remains of a 3000 year old settlement was discovered, with it partially overlapping with the intended site of the new slip roads. BP and Welcome Break sponsored the excavation and investigation into the site.

The service area was officially opened on 16 June 1993 - one day before fellow A74(M) Welcome Break at Abington opened. A time capsule was buried on site as part of the ceremony.

The main amenity building has units built in a courtyard around a Burger King (previously Julie's Pantry) in the centre, with two glass roofs following the main walking paths around the building. This creates a site much larger and more airy than nearby Abington.

The Scottish gateway theme continued in the décor of the new building - like most Welcome Break service areas, David Fisher was commissioned to paint a mural for the services. Here at Gretna, his artwork was themed around Scotland, and it was displayed all around the back wall. It has since been painted over.

Another facility originally at the new service area was was the Gretna Green Business Bureau. This was a centre aimed at travelling business people, and it featured two conference suites as well as individual work stations for people working on the move.

In the 1990s, Welcome Break wanted their services to each have a unique shop. At Gretna, this was the Canny Scot Shop, and it is the only one still to be open.

Although the front of the services has been refurbished many times, the interior doors are still in their original blue-and-yellow colour scheme.

Some of the space now used by the Harry Ramsden's outlet had previously been used by an extended WHSmith store.

The service area has lengthy access roads, designed to provide relaxation by looking like an upmarket country retreat. The car park was equipped with mock-historic lamp posts, with a round bowl at the top of a short post, like you might find in a hotel or restaurant of the same era. Unusually, these extend all the way along the slip road to the motorway. Posts like these normally light up a car park or pedestrian walkway, but at Gretna they're used to light a road with a 70mph speed limit.

The original facilities were positioned roughly where the modern car park is now.