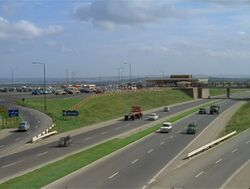 There was a lot of discussion about whether the M2, which is effectively a short bypass, was going to need its own service area. The M2 did need its own maintenance compound, and the plan was to leave this as an infill site to be turned into a service area later.

It was eventually decided to develop it into a full service area to prevent vehicles from taking the old road in search of facilities, although there were concerns doing this would put facilities on the A2 out of business.

While the Medway Towns Bypass was under construction, the Maidstone Bypass was already finished. That one, which is really Kent's first motorway, didn't get any service areas.

The likely place for the services was close to Mount Lane in Hartlip, chosen because it was at the midpoint of the motorway, with two suitable half-sites opposite each other in a rural area with local access available. Consideration was given to developing only one side of the motorway, mainly for the sake of trying out a new idea.

Sites near Bredgar by the A249 were analysed, but it was decided they would never receive permission to build there. Building at M2 J4 was also looked at, but there were concerns this would overload the junction.

The Local Planning Authority objected to Hartlip because it would have ruined the views. Attention then turned to the current site at Farthing Corner, which was flat and would all fit within one field. Farthing Corner also attracted objections, with opponents claiming that the services wouldn't be needed at all.

The agreed site was 21 acres in size, of which only 12 were for developing: the rest would form picnic areas and embankments. There would be 48 toilets, two cafés and a restaurant. Tenders were then analysed based on their rent offer, fuel offer, catering offer, traffic flow, landscaping and company stability.

As the motorway is in a cutting at this point, it was generally agreed that the entire service area, including the buildings and the car parks, would be raised above the height of the motorway - a layout which is very rare in the UK. Normally the car parks would be built at road-level, but this would have been damaging and would lose the views of the countryside.

The firm responsible for Strensham made a bid for Medway. Their financial offer was poor.

Their restaurant would have sat 470, and deliberately avoided quick-service catering which they didn't feel would be suitable here. 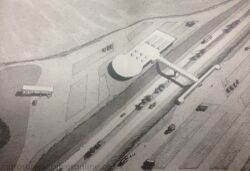 Unlabelled drawing of one of the planned services - assumed to be Airborne's.

Airborne, the company who provided catering at Gatwick, made an excellent financial offer. They planned a restaurant with 540 seats and proposed a layout with good traffic flow.

However, their proposed amenity building was "too geometrical and without interest". Their architect was Sydney Clough, Son & Partners, who also worked for Top Rank.

Normand were a subsidiary of J Lyons & Co, who also owned Lyons Cakes. They had been encouraged to enter the industry, but their bid was described as "deplorable" and "inadequately presented".

Normand were told "significant changes" would be required if they were to build their proposal. Coach and lorry planning was far from the building. They planned a small restaurant on the bridge, seating 220, an idea that was called "interesting" and would go on to become a standard design.

Their plan had a transport café divided on each side of the waitress restaurant on the bridge.

On the north side would be a promenade with a wide, paved terrace running around the perimeter.

They were thrown out because their plan offered a poor profit. 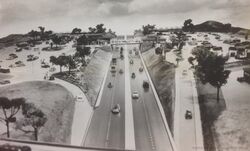 A model of Top Rank's plan.

Top Rank were new to the industry and made an excellent financial bid. They were attracted to the site as they felt the forthcoming Channel Tunnel would increase the traffic levels, and they planned a restaurant with 468 seats and children's play area.

Their design was described as "imaginative" and their layout had good flow. They were working in partnership with a garage business, PDS of Worcester.

Their architect was Sydney Clough, Son & Partners. Their design, which turned the bridge into a terrace, is described below.

Just as the winning design was about to be announced, a curveball was delivered from an unexpected source: a coach company called the East Kent Road Car Co.

They claimed that they would be using the services a lot, parking up to 40 coaches at any one time. The facilities that were about to be built would be completely inadequate. After some debate the Ministry decided to take their claim as an exaggeration, and to stick with their existing plans.

"It all seemed rather scruffy, like an amateurishly-run transport café."
Egon Ronay, 1977 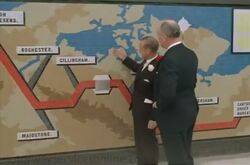 A large mosaic showed the services on the new motorway.

Farthing Corner services was officially opened on 29 May 1963 by Transport Minister Ernest Marples. It was built by George Wimpey. Upon opening, Rank described it as "gay and colourful", and intended the blue and yellow colours to offer a warm welcome to visitors to England. A government inspector told the Scottish Office that Farthing Corner is "at least presentable, even if it's not an outstanding contribution to the beauty of the country".

To showcase the best of rural England, the westbound (Londonbound) restaurant was built with large windows, offering a wide view to the south. It cost Rank £350,000 to build the service area, almost four times more than the government had asked them to spend.

A restaurant at each end provided multi-lingual menus, and staff wore old English-style hunting outfits. They were mustard and teal in colour. One restaurant, open 07:00 to 19:30, had green, plastic settees and stools, with square counters in the middle. It was called Medway Restaurant and it offered a choice of à la carte or a set meal. The second was a busier, long, more utilitarian room with orange and green plastic benches, named Channel Buffet.

The eastbound service area had a large picnic area with a kiosk which was only opened three times a year. People were walking up to the fence to get a view of the Medway Estuary. There was a picnic area by the westbound exit too, which was also barely used.

The front of both buildings had a large terrace area, with an umbrella-style building at the front, named Kentish Kiosk. This had a sign over the door promising: "cola, candies, cigarettes, ice cream, orange". On each carriageway the terrace had separate doors leading to the toilets and restaurant. Plans to advertise other Rank establishments from around the service area were refused.

Despite it being ready to handle coaches and cross-channel traffic, on an ordinary day the majority of customers would turn out to be locals.

Within a year of it opening, the Ministry of Transport accepted there had been "considerable criticism" of the road signs they had provided around the service area. The vast majority of these involved the westbound exit to the M2, where a sign directing traffic around the petrol station was inadvertently sending people into the maintenance compound. A new signage scheme was soon drawn up. This continues to cause problems, even today, as the main circulatory road feeds too perfectly into the Rear Access.

The service area initially became known for being particularly dirty, and was described by inspectors as "sleazy". One of the takeaway kiosks was converted to Wimpy in 1968.

Farthing Corner didn't turn a profit for many years, and was operated on tight margins until the Prior Report of 1978 changed its rent agreement. To celebrate what was a new era for their industry, the following year Rank provided a thorough refurbishment. This was likely to be the date the bridge was given its roof.

Once the bridge was covered up, the two buildings became one, with the bridge area now forming the majority of the public area. Thanks to the car parks being so high, the new arrangement created an unique layout where a single-storey building straddles the motorway, and where customers can stroll from one car park to the other without needing to climb any large flights of stairs. In practice, that meant the facilities on each side could be consolidated, as the walk from one side to the other was so convenient. It did also mean customers would forget they had crossed the bridge, and use the wrong exit.

Photos from 1992 show the bridge having beige tiled flooring with fixed seating, and a shop called Pavilion Store at the end. The restaurant had a red carpet, fixed red seating and large green signage. The entrance had dark brickwork and frames, with less signage and no window decals. Signage welcomed customers in England and French.

With the additional floorspace gained by putting a roof over the terrace, the rest of the amenity building has hardly expanded at all. The dining area on the bridge later became Burger King. A Little Chef was added in 1996 and removed in 2008. A Bureau de Change has been removed from the services too. The Costa outlet was moved in January 2015, making way for the M&S Simply Food store.

One of Rank's first budget hotels, the Top Rank Motor Lodge, was built in the old westbound picnic area in 1987. It later became Pavilion Lodge, Granada Lodge, and then Travelodge.

The petrol stations were both rebuilt in the 1990s. The eastbound car wash was demolished in 2022. Another old garage building, on the westbound side, was used as 'The Centre' and more recently by North Kent Counselling.

On 3 December 2010 the building at Medway suffered a broken window due to storm damage. This caused the M2 below to be closed, with traffic being diverted through the service area.

Despite being right outside the entrance, the takeaway kiosks were boarded up and painted Moto's turquoise. They were both demolished in 2012, being replaced by advertising hoardings.

"Farthing Corner is likely to become a loss-maker with negligible growth potential."
Rank, 1973

In 1973, Rank weren't pleased with the news that the completion of the M20 was going to see some of their trade diverted onto the new road. They were denied compensation because their contract never promised that the M2 would always be the main road to Dover, even though Rank had factored this into their design.

The effect of the opening of the M20 is clear. It's not so much that trade dropped, but that it didn't rise quickly like it had done at so many other service areas. By the 1990s this had turned it into a bit of a pleasant, forgotten backwater. Its large coach park now seems unnecessary and almost taunts it for the days where this was a major holiday route.

The eastbound side received a small extension in 2002, adding facilities and attempting to attract more people making shorter journeys. 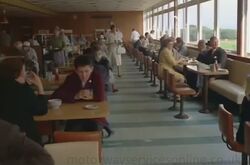 In 2006 the services won a four star loo award.

In 2004, Good Housekeeping rated the services as one star, describing it s "depressing", "dreary" and "unpleasant", but the busy Little Chef restaurant apparently served good food.

In 1991, Which? told motorists to avoid the service area, complaining about views of the motorway, long queues and poor service. It was reported to be one of the worst in the country.

A 1978 government review described the service area as "depressing".

In 1977 Egon Ronay rated the services as "poor". He said the café felt like an "amateurishly-run transport café", the food was "unimaginative" and it "all seemed rather scruffy", with a jukebox which "can be unpleasant".