The term 'infill service area' has been used on two occasions to describe new motorway services.

Originally, it was decided services should be built every 12 miles, but that early traffic levels would only warrant building every-other site. Very few of the intermediate plans went ahead as intended, Sandbach being an example of one.

The policy was to identify the sites of the services, purchase the land and prepare the site for construction, and then to rent it for agriculture until it was actually needed. The theory was that it's considerably cheaper to compulsory-purchase the land as part of the motorway construction than after it. Often, once the site was needed design standards would have moved on and the chosen site would be unsuitable. As a result, the policy changed to only identifying potential sites and not doing anything with them.

Eventually, this process was abandoned all together, as most motorways were being taken to public inquiry and there was no point investigating potential services until the exact route was known. 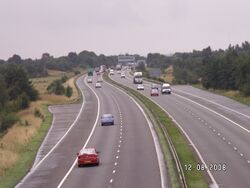 A reserve service area which was never used, given away by its ghost slips.

The term 'reserve services' was used to describe sites for future services which had been identified but that the Ministry did not want to pursue yet. Some of these would go on to become infill services. Others were never used and, since the government are no longer responsible for choosing the locations of new services, are likely to be forever unused.

Recycling Of The Term

Applications for new infill services need to provide a detailed demonstration of the need for their new service area.

The policy was updated in 2013, and the revised version dropped all references to the term.