While Britain has plenty of motorway service areas, it has just as many which were planned but never built.

In this section, we detail the original plan for service stations on each motorway, as well as listing any evidence of the projects which were never finished.

In recent times, new motorway service areas have been proposed by private companies instead of the government. This led to a boom of new proposals, often fighting over the same few parts of the country. Where available, these planning applications which were ultimately unsuccessful are all listed at the bottom of each page.

Tap one of the roads below to see a map of what its service areas were supposed to look like. For a generic guide to how service area locations are chosen, see Planning. If a road isn't covered here, try searching the names of the service areas which were built on that road.

The M3 functioned like a short commuter road, with three service stations on its agenda.

The M4 was where it all went wrong - developed in two sections with nothing but trouble in the middle.

Low traffic levels was the main concern with the M5, leaving a number of service areas unfinished.

The M6's notoriously high traffic levels saw the majority of its planned service areas brought to fruition - but there are a few which slipped through the net.

A great example of a road where none of the original plans ever came to fruition, despite having one of the most well-known half-built service areas of all at Chigwell.

The relatively short M18 has its own half-built service area at Hatfield.

Progress was very slow with the M20, but two of its planned service areas eventually succeeded. 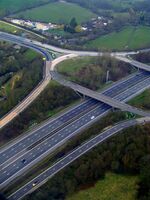 Famously, most of the M23 was never built. This made the plan to provide service areas on it rather redundant.

When the planned M16 and M25 motorways were merged to create one London Orbital, it was difficult to plan the service areas - especially on the western side.

The M27 only has one unfinished service area, but it is very easy to spot - this page is all about Meon Valley.

One of Britain's newest major motorways makes its way across some fine English countryside - which meant objections were rife whenever service areas were suggested.

The motorway which likes to link other roads together has a long history of planning battles with regards to service areas.

Two motorways in the north west of England where no services were provided for many years.

From Lizard Hill to Castle Farm, there isn't much more to the M54.

At the western end all of the service areas were built as planned - but then they lost interest. We've thrown in the M60 and it's old identity, too.

A real mix of the old and the new: some examples of early planning, a half-built service area, a whole heap of private proposals and a knotted mess of public inquiries as developers compete to serve one of Britain's newest motorways.

The busy freight route to Felixstowe was thrown together out of sections of existing road, creating a patchwork quilt of service areas.

A flurry of interest between Newbury and Oxford made up the majority of proposals for the A34.

All of the unbuilt, unfinished and once-planned service areas have been placed on this map, allowing you to see which parts of the country received the most attention.