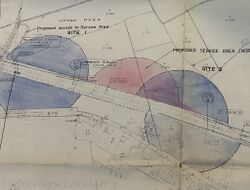 A map comparing possible sites for a service area in the 1960s.

Some of the most famous (and indeed infamous) motorway services in the country are positioned at difficult roundabouts. The operator normally gets the blame for this, and occasionally they deserve it, but most of the time they are fairly innocent.

Until 1992, motorway service area locations were chosen by the government. There was no rule that they had to be built online, but they usually were. They were planned at intervals roughly every 15 miles (generally skipping every other service area until traffic levels picked up). The exact distance between motorway service areas varied, originally as low as 12 miles, changing to a "case-by-case" basis of around 28 miles in 1979.

Initially, the distance between service areas was enforced fairly rigidly. As time went on, factors such as environmental concerns, the need for a large plot of land, and political objections all began to take priority. Motorways were increasingly opening around the rural-urban fringe where there were frequent junctions and plenty of irate neighbours. In addition, developers were falling out of love with the whole idea, so the government tried to keep them sweet by choosing profitable locations.

These factors all combined to cause many motorways like the M25 and M42 to open without enough service areas, and to cause services to be proposed in totally unsuitable locations such as Gordano, South Mimms, Tamworth and Birchanger Green, which are all offline examples. At Cherwell Valley, the local council had been pushing for that location for 10 years before it was built, as they knew it involved the least work.

Highway engineers genuinely seemed to believe that if they had several major roads, a few local turnings and a service area all arranged around the same roundabout, it would keep everybody happy by avoiding the need for multiple buildings or big, expensive flyovers. Which it did, for a few years, until these roundabouts became congested and they have been a nightmare ever since. 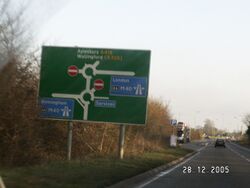 Services can be lost within in some awkward junctions.

By 1992, developers were totally responsible for planning service area locations. Developers favoured smaller, profitable locations at existing junctions, as did the planning authorities. The new policy was supposed to encourage more frequent, smaller service areas. It also allowed the government to distance themselves from the whole process, which they were particularly keen to do after becoming involved in so many controversial service area proposals, with Clacket Lane causing the most trouble.

Operators welcomed the freedom, but suggested that the process would now take longer, as the Department of Transport wouldn't be able to endorse any new proposals. This meant that while there was an increase in new proposals, there wasn't much more diversity, as you needed money and experience to be able to see the planning process through.

A second problem soon emerged with the new system. Developers were always going to prioritise the locations which would make the most money, and these would be places with lots of cars. Facilities for HGVs were often an afterthought and reduced to the bare minimum to see the project approved.

The new regulations specified an absolute minimum distance of 15 miles between service areas. That was abolished in 2013, as part of the industry deregulation. Two rival service stations can in theory now be built opposite each other, if they can both get planning approval.

On A-roads, planning services has always been down to the private sector, with no joined-up planning process.

In 1990, England's Department of Transport outlined the criteria they had been using when searching for a suitable site for a motorway service area:

You can understand how it became difficult to apply all these rules to many of Britain's crowded motorways.

By 1964 at the latest, it had been written in black and white that no motorway service area was to be built within one mile of a junction. As always with roads policy, exceptions were made. Where two different possible sites were being examined, the one that was closer to a junction would be seen as a negative, and not the objective.

The only plausible explanation is that other factors, like the distance between service areas and the suitability of the land, always took priority. The distance between exits, while it was known to be a problem, wasn't seen as a major issue in the 1960s, as can be seen in many of the road layouts that were built at the time.

Motorways With No Services 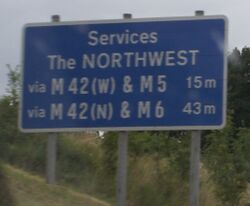 A sign listing the two different routes and their (lack of) services.

Once the motorway service area planning system had been separated from the main motorway planning system, it was inevitable that issues would soon arise. Government guidance has generally been to keep services no more than 28 miles apart on any motorway route, but there have been some notable exceptions: 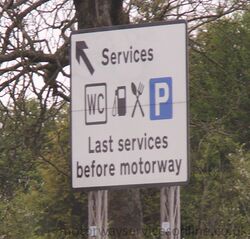 A sign on an A-road, advising traffic that this is the last service area for a while.

There are no figures for the A-road network.

The general guidance is that rural A-roads should have service areas every 12-25 miles. The mighty A9 in Scotland goes an impressive 106 miles between official service stations and is probably the winner in every category, but it does pass numerous villages and local facilities along the way and it's probably misleading to totally ignore those.

You could achieve a high figure by looking at an A-road which has been replaced by a motorway. The A38 has service areas in Gloucestershire and Derbyshire, and runs for about 98 miles in between them, but nobody sensible would take that route when you have the motorways instead.

There are plans to turn the A66 into a dual carriageway between the A1 and the M6. Assuming this happens (and assuming no new service areas open) this would probably create the longest inter-city dual carriageway with no services, at about 60 miles. We are open to suggestions as to what the current holder of this title may be.

Ireland's entire motorway network had no official service areas until 2010. Between the M8 being finished in May 2010 and the services opening in September, it was possible to drive from Dundalk to Cork: 336 km (208 miles), entirely by motorway, without any services. This was leagues ahead of anything England has ever had.

Currently, the longest motorway journey in Ireland with no service areas involves using both the M17 and the M18 from Tuam to Shannon, totalling 94 km (58 miles). If you follow the N18 dual carriageway and the M7 to the nearest official service area at Birdhill, that becomes 138 km (86 miles).

There are many examples of signposted A-road services which are only one mile apart, such as Solstice and Countess on the A303, or Stansted and Birchanger Green on the A120. The exact league table would depend on how you measure each roundabout.

There is one more example, but it's a bit odd. There are services at M4 J23A (Magor) and M4 J23 (Severn View). The two exits are precisely 1 mile apart. This means the moment you leave Magor, you're met with signs for Severn View. However Severn View is actually located far down the M48, so the two are actually 10 miles apart, and most road signs make that clear.

Awkward To Get To

Given the number of comments we receive about service stations that take too long to get to, we decided to find the worst offenders.