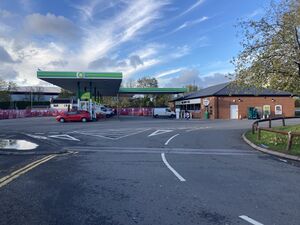 Positioned on the link road between Gloucester city centre and the M5 at J12 is this small service area, next to the Cross Keys Roundabout.

Use of the BP forecourt is limited to 30 minutes maximum stay for all vehicles from entry to exit of the site and is strictly enforced. 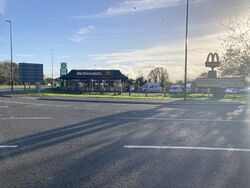 Plans for a service area here were first proposed in 1988 by Whitbread who were planning a 'drive-in' restaurant here however they were refused planning permission. Mobil then applied to build a service station with Forte, which opened in October 1990 as the Cross Keys Garage and the Hardwicke branch of Little Chef.

With traffic now choosing the relatively new M5 nearby as opposed to the older A38, plans to significantly expand the service area came in the 1990s which included a new Travelodge hotel, parking areas, picnic areas, a lake and a new roundabout on the B4008, in an effort to have signs for it added to the M5. Other sites were also looked at, including one on the opposite side of the B4008 and one from Swayfields on the other side of the M5.

The Little Chef closed in 2001 and was demolished to be replaced by the McDonald's.

BP Express later acquired the filling station in November 2016 and rebranded the site to include a M&S Simply Food store and Wild Bean Café.