23 more photos in the gallery
Location:

Very small services on the A419, located just half a mile from the M5 motorway. 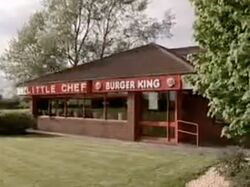 The main restaurant building pictured in 2005, as a Little Chef and Burger King.

The service area is often referred to as 'Stonehouse' or 'Fromeside' services. Throughout most of the 2000s, several popular road maps marked the services as a non-primary A-road service area named 'Oldbury', despite not listing any other facilities like this.

This may have been a deliberate exception to identify anyone copying their work. Even so, it raised the profile of what is otherwise an unremarkable service area: Oldbury was often used as an example in the map key, as it was usually the only non-primary service area in the whole map.

This site is commonly known as Oldbury, even if Little Chef called it Stonehouse. It shouldn't be confused with another former Little Chef and Travelodge in the larger town of Oldbury, in the West Midlands. Confusingly, that one is also incorrectly shown on some maps.

The service area was developed by Trusthouse Forte in the mid-1980s who opened the Stonehouse branch of Little Chef here alongside a Shell filling station. This was later joined by a Travelodge hotel in 1997 and an extension to the restaurant saw a Burger King added in 1998. The restaurants closed for a short time before the Little Chef reopened, but closed again on 26 September 2012.

The building was later acquired by Euro Garages who, on 16 August 2013, opened a Starbucks store within the former restaurant area. They also later turned the Burger King unit into a Subway store.