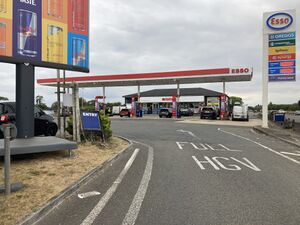 A419 northbound between Cirencester and Swindon

The northbound partner to Seven Bridges, and now the older one of the two. 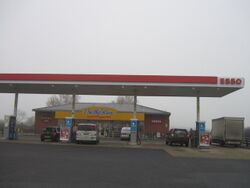 The service area was built in the late 1970s or 1980s, after the A419 had been widened to become a dual carriageway. It offered an alternative to Seven Bridges, which was now only accessible on the southbound side.

Roadchef planned to build one of their new restaurants next to both Calcutt and Seven Bridges in 1988, but planning permission was refused.

When it was managed by Esso, Calcutt had 'On the Run' branding and a Costa Coffee unit. It was sold to Euro Garages in late 2015, and they branded the store SPAR and added Subway and Greggs concessions. The Subway permanently closed in 2020 and was later replaced by a Rollover cabinet in summer 2022.