No photos tagged with Warrington. If you have one, why not upload it?

A new motorway service area to be built at J11 of the M62 was approved in May 2022, following a public inquiry.

Extra are using the name Warrington to describe their proposal, despite the existing service area at Burtonwood actually being much closer to Warrington. Locals will know this new site as 'Birchwood'. 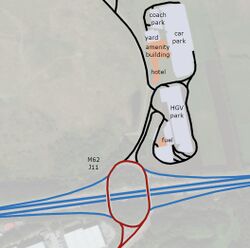 The junction is on the edge of Warrington and becoming increasingly industrialised. A dual carriageway would run from the roundabout down to the service area, before looping around the lorry park. This would replace Sliver Lane and the closed off entrance to Birchwood Way which is currently used mostly for parking and fly-tipping. It used to provide access to a landfill site.

Extra have said their plan will "echo surrounding agricultural buildings". In a statement, they also promised "popular stores and retail outlets such as Leon, PizzaExpress, Greggs, Starbucks, Burger King, McDonald's and WHSmith", as well as a hotel. These would be spread out across two storeys, with the ground floor arranged around an atrium while the upper floor would likely be used as a meeting space or lounge.

Despite the ordinary-sounding layout, from the outside the building would have looked nothing like any other service station - more like a waterside apartment. Extra have described their plan as a "new concept" and "world class" facility, with up to 400 jobs created.

In late 2018, Extra announced that they intended to build a service area a, at Birchwood. They argued that it would fill a large gap in existing service area provision, although their evidence uses a convoluted route from Birch services to Charnock Richard via Croft. The location was chosen following a study which examined possible locations at M6 J23, M62 J11 and M6 J11A.

The proposal was rejected by councillors in June 2021, largely because it infringes on the green belt with what they argued was a lack of proven need. Extra appealed this decision in January 2022.

Controversially, Warrington Borough Council have decided not to defend their decision during the appeal, implying that they don't think it will stand. Since the application was originally refused, National Highways have joined the developer with a 'statement of common ground', in which they urge the decision maker to attach significant weight to the improved road safety. That's a very unusual move for National Highways. The main opposition at this appeal was therefore Extra's rival, Moto.

The appeal ruled in favour of Extra in May 2022.