Unbuilt Services On The M53 and M56

The north west of England has an unusually dense concentration of motorways. Many of them are short, half-finished and filled with commuters making relatively short journeys between suburbs.

Throughout the 1960s, the government's policy was that all motorways needed regular service areas. This caused a bit of a panic when interest in new service areas dried up in 1968, because they had no plan B.

As there was no plan B, the M53 and M56 had to follow the old policy: that they were long motorways, so they must have service areas. The sites identified were:

One official drawing showed a 'Daresbury services' being added to the mix as well. It would have been on the roundabout at M56 J11. It's hard to see how this would fit in at all, and it's likely that it was just an alternative that was quickly thrown out. One document says that Daresbury would be "a very low priority".

The plan remained in place for a while, despite issues that will be described below. With zero progress having been made, it was replaced by the 1986 M56 Motorway Service Area Plan, which recommended that a service area be provided at Hapsford as soon as possible.

Agden had a stated opening date of February 1971 - in the event, the motorway wasn't ready until 1974.

It's not clear if an exact location was ever found - it was never purchased - but it would have been positioned immediately west of M56 J8, where a lot of traffic would have left for what was supposed to be the M60, but traffic on that road would have had access to Knutsford.

This meant that the traffic left on the M56 would have been extremely low. They also quickly realised that its close proximity to Manchester would mean that not many people would need to stop eventually.

It seems as soon as the plan was put in place, it was ruled that building Agden and together would be too much, and that Agden should be held in reserve purely because that's what the policy required. It was suggested that it could open as a picnic area only, but it never even got that far.

Eventually the construction of the private truckstop at Lymm mopped up any demand for a service area here.

Hapsford's story started out exactly the same. There wasn't enough demand for it to open with Agden, but it was at least after the M6 and further from Manchester. A suitable location was found at the Hapsford Junction, which would make it cheaper and easier to build.

With Hapsford being better than Agden, plans were in motion to get it built. It was scheduled to be opened up to bids in April 1970. It's not clear if this happened, but in any case there was no interest in it. This part of the motorway opened in 1971 with no service areas.

The lack of service areas on this corner of the motorway network became a cause for concern, so the Department for the Environment opened a picnic area on the site at Hapsford. This was signposted from the motorway as a facility.

The intention was always that the Department for the Environment would turn Hapsford into a full motorway service area at the earliest opportunity. That time never came, but after motorway service area planning was privatised, two developers showed an interest in this. A last-minute name change saw it reopen as Chester services in 1998.

So many things about the M53 are a mystery, so it's not a surprise that of all the Ministry of Transport's proposals, Eastham Rake was probably the hardest for us to track down. There were a couple of hints that it was on the agenda here and there, but eventually we were able to find minutes from a meeting where it was discussed at length. Most of this section is based on that meeting.

The meeting started by explaining that when the M53 was being planned, the consultants' report said that if the M53 needed a service area, it should be built at M53 J1. This was mainly to ensure broken down vehicles in the Mersey Tunnel had somewhere to be towed to. The Ministry pointed out that this was far too close to Liverpool city centre to be a motorway service area, and suggested the consultants look further south. The road was only being planned as far as J5 at the time.

The consultants came back with four possible sites: two were rejected on engineering grounds, one was rejected on amenity grounds, leaving only Eastham Rake. Cheshire County Council objected to this location, as did Bebington Borough Council, Neston UDC, Wirral Green Belt Council, The Wirral Society and two landowners. Many of the objectors pushed for the M53 J1 location instead, but the Ministry fought their ground, and argued that Eastham Rake was the only suitable location.

After some negotiation, Cheshire County Council were prepared to accept that Eastham Rake could be a suitable place for a southbound service area. In line with the development issues across the country, they agreed that Eastham Rake services could open with breakdown facilities, toilets, parking, limited catering and one brand of fuel, with space for an expansion when needed, all on the southbound side only.

"The demand for facilities on the southbound side is questionable"
Ministry of Transport MSA Board, 1969

While that was some progress, the Ministry had calculated that most of the demand for facilities would be on the northbound side. The council continued to oppose any northbound facilities.

All of this arguing was happening when it wasn't even clear where the M53 was going to go immediately south of here. It had always been assumed it would pass west of Ellesmere Port, possibly but not definitely meeting the M56, but a new option was now being considered where it would follow the existing roads to the east. With an undecided route, strong opposition and no commercial demand, the Ministry concluded that Eastham Rake services "should not be forced in the present circumstances".

Another interesting comment on the proposal was that Eastham Rake, "is hard to justify on this short motorway, but as it had been argued in the face of strong opposition, it should not be given up". And on that basis it was never cancelled: it appeared on lists with a scheduled opening date of June 1973, and even seemed to show "quite good" traffic levels.

One final comment on Eastham Rake was that the Ministry should "let the market decide if it is necessary". Evidently the market did decide, because 50 years later there is still no motorway service area on the M53! Having said that, motorway giants Forte did open a Little Chef and Travelodge nearby in the 1970s. 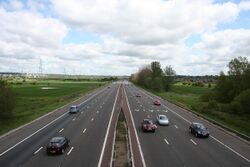 The site planned for Frodsham services.

Some of the new motorway services once planned for the M53 and M56 we have uncovered include: