No photos tagged with Tatton services. If you have one, why not upload it? 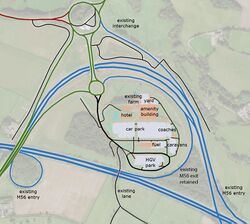 The proposed road and site layout (with updated access).

Tatton services is a proposal from Westmorland, to be built in the middle of M56/A556 interchange.

The service area would be built in partnership with the Tatton Group, on the south side of the new roundabout at M56 J8; a piece of land which has been surrounded by major roads on all sides since 1974.

As is always the case with Westmorland, Tatton services would be different from most other service areas. It will reject big brand names and instead sell locally produced food and craft projects, with a carefully landscaped building and a desire to showcase Cheshire and put Tatton on the map. It will also support local charities.

There would be an amenity building containing a café, farm shop, toilets, and tourist information, as well as a 100 bedroom hotel. They refer to the petrol station as a "fuel barn", on the basis that it is one of the first in the country to be designed to be scaled back as fuel sales become less important. It would have minimal advertising.

These three buildings would be linked by an "outdoor kitchen" garden, and it would all be built around the existing Yarwood Heath Farm building. At least 54 electric vehicle charging points would be included; far more than any motorway service area currently has.

The developer says around 325 jobs would be created. They say the location was chosen for both environmental and practical reasons, as there are no facilities to the east of here. Lymm, a few miles to the west, is not officially supposed to be catering for car drivers.

The first public version of the proposal suggested that the developer would close the existing circuitous exit from the M56 eastbound, replacing it with a new slip road which would run directly into the service area. No reason has been given for this being removed, but changing the layout of a motorway can be a very difficult and expensive process for a private company. Other changes include the removal of the new roundabout at the site entrance, with a one-way system being in place instead.

A dedicated mini-site has been created to promote the proposal, and consultations have been running with the public since August 2020. Full planning permission was requested from Cheshire East District Council in March 2022, with a decision expected in 2023.

Moto announced plans to expand the facilities at nearby Lymm in November 2022, including doubling the number of car parking spaces. They have objected to the Tatton proposal. A number of councillors have opposed the plan, arguing that it is a tenuous definition of a motorway service area and that it shouldn't be claiming that there are special circumstances to ignore the green belt.