Road: A30 at Daisymount Junction
(also accessible to traffic on the B3174 and the B3180)
Location: Daisy Mount, Whimple, Devon
Developer: MFG
Grid reference: SY058954 (SABRE Maps)

No photos tagged with Whimple services. If you have one, why not upload it? 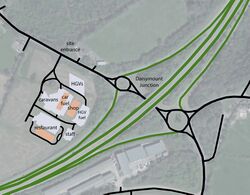 Many service areas have been proposed at Daisymount Junction (Straightway Head) on the A30 near Whimple.

The latest proposal is dated 2021 and comes from MFG. The main forecourt would have food and coffee units, 5 electric vehicle charging points, 8 HGV spaces, 4 caravan spaces, 17 car parking spaces and 18 staff parking spaces. This would be in addition to a McDonald's restaurant, which would be built separately with its own 47 parking spaces. The road between them would end at the site boundary, suggesting there is provision for it to be extended.

The entrance would be positioned on the B3174, where new bus stops would be provided. Highways England have suggested that the operator should agree to place road signs on the main A30 advertising the new facility.

The proposal is currently being considered by East Devon District Council. It's far from the first time a service area has been planned here: Taylor Catering Foods have been involved in a number of applications, generally much larger. Some were approved, but the most recent one wasn't. This included a dedicated amenity building with a food hall, shops, tourist information unit and hotel. The applicant said they were heavily inspired by Tebay.

During the 1993 proposal, the Department of Transport signalled their support for building a new service area on the A30. At the time, there was competition between the proposal at this junction, and another at Clyst St Mary. Since then, Highways England have committed to the A358 becoming the main route between the A303 and the M5, meaning that in theory there would be less strategic traffic along the A30, but it doesn't mean that all the holiday traffic will follow the new prescribed route.