For a list of current service areas on the M62, see Services on the M62.

When looking for an important motorway, people tend to focus on the lower-numbered ones like the M1 and the M6. The M62 deserves a place at that table, but to get there, it had to take us through some pretty complicated history.

The M62 number was originally assigned to the Lanchester-Yorkshire Motorway; a road that would have gone from Stretford (south-west of Manchester) towards Hull. The first section to be built was around Manchester, and was too short and too built-up to even think about service stations. As the motorway extended eastwards, a plan was needed.

That plan was: (Junction numbers refer to the situation upon opening.)

Whereas the policy on other motorways had been to identify sites at 12 mile intervals and initially develop every-other one, a special rule was needed for the M62 because building across the Pennines was an engineering challenge on its own, without trying to build a service area too. Instead, it was agreed to build a large service area on each side of the Pennines, as close as a suitable plot of land could be found. Both of them had their issues, but they were all that was available.

Interestingly, one more service area was provided immediately east of the M62 at West Cave, although that may just be a coincidence.

The planned M62 was soon merged with part of the South Lancashire Motorway (the M52), which led to a hurried renumbering of the motorways around Manchester that never quite suited the junction layout. It meant that the M62 would now have one more service area, Burtonwood, but the large gap between this and Birch was never considered because the two weren't supposed to be brothers.

Meanwhile, as the M63 became the new road for the motorway that would be extended to the south of Manchester, government policies became less strict and there was no chance of a service area being proposed here.

When the M62 opened in the 1970s, businesses and engineers still believed that the most profitable service stations would be ones near cities. As a result, Burtonwood and Birch were easy to lease. More surprisingly, so was Hartshead Moor. All three opened around the same time as the motorway; Hartshead Moor even hosted the opening ceremony.

As we head further into Yorkshire the story is a little different. The last two sites were never built. Here's what happened - these sites can both be matched up with the map at the top of the page.

With service areas close by on each side, Methley (J30-31) was always intended to be a reserve site: it would only have been built when Hartshead Moor and Hensall reached full capacity. Its location was chosen by West Riding County Council, who were heavily involved in this part of the M62.

When the road was built, four clear ghost slips were provided. They were positioned close together which suggests it would have been a small service area. Hungate Lane would have had to be diverted.

With Hensall not being built, there was no chance of Methley ever being built. With hindsight it was not a good site: it is very close to M62 J30, and the land is at risk from mining subsidence.

West Riding County Council pushed for construction to take place on one side of the road only. They envisaged building a full service area on the eastbound side, with an underpass and two roundabouts allowing westbound traffic to reach it. A layout like this hadn't been built in the UK at the time, and the Ministry didn't like it: they wanted fuel to be available on both sides. By 1971, West Riding were still pushing for it to be one-sided, perhaps with it operating as a partner to Hartshead Moor.

In the event, Hartshead Moor was developed as a full service area, and Methley was never needed. Now that a new service area has been built at Ferrybridge, the site at Methley is now used to hold a sign telling traffic that Ferrybridge is nearby. 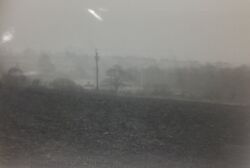 Photo from a site visit, before the motorway was built. 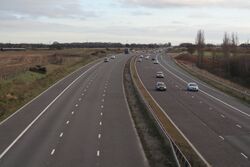 The ghost slip at Hensall (right). The fence on the left reveals where the second one was.

Unlike Methley, Hensall services (SA84; J34-35) was all set to go. There was just one thing missing: interest.

Operators were invited to bid to build Hensall services in 1973 and again in 1975, but low forecast traffic levels meant nobody wanted to run it. The Department had hoped that it would be open by 1977. Lack of developer interest was common at the time.

The Road Construction Unit wanted to see a large westbound side, with at least a temporary block of toilets and a kiosk on the eastbound side, on the condition that space was left for a permanent eastbound facility to open in the following 10 years. They would have provided a small footbridge, which they would have expected the operator to build a roof over if the facilities were going to be on one side. Other authorities wanted the eastbound side to open first.

As the site is low-lying and visible from neighbouring properties, only single-storey proposals would have been allowed, and there was a ban on any buildings straddling the road. Dense tree planting was requested, and some parts of the land were reserved for landscaping. The layout would have been dictated by neighbouring properties, which would have needed to be kept away from the noise if they didn't want to sell up.

As a sign of changing times, it was suggested a separate takeaway unit be built in a picnic area (this was removed before the second tender), and it asked operators to be mindful of the need to rearrange the facilities as demands change - a big problem with older service areas. It was also stressed that automated catering alone would not be sufficient. Hotels were specifically forbidden.

The Department expected at least £700,000 to be invested in the proposal, which covered a 40 acre site. At least 200 car parking spaces, 75 spaces for lorries and 12 for coaches were required on each side, as well as 110 toilets. Access would have been provided to Broach Road and Moor Lee Lane.

This would have been one of three service areas to trial only offering two brands of fuel. An exception to the usual rule where operators can't own two adjacent services was granted to try to get Ross and Granada interested in the plans, but to no avail. The Ministry were very disappointed that these modifications hadn't stopped Hensall failing.

With extremely low traffic levels (predicted to be half of what Burtonwood was receiving), a long list of regulations and complaints from neighbours, Hensall is pretty much the epitome of why operators lost interest in building motorway services during the 1970s. Roadchef specifically said they felt they would not be able to make back the money they would have to invest in it.

When the motorway opened in 1975, four ghost slips were provided. The footbridge was removed on 7 March 1992, the two exit slip roads were later removed, and the land was sold in 1996. In 2001 this location would sadly become infamous for being the site of the Great Heck rail crash.

Since 1992, developers have been solely responsible for coming up with their own proposals for new motorway services. Unusually, this hasn't had much impact on the M62 or the M60.

Considering all private proposals, the ones we have uncovered for the M62 and the M63/M60 are: