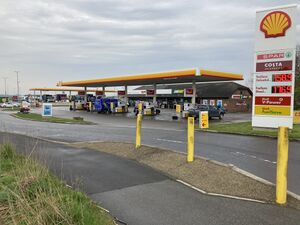 Near the end of the M62 is this new development, with a range of separate facilities rather than a single amenity building.

Truckstop: Parking and use of the forecourt and truck stop is free for the first 2 hours free for all vehicles, after which HGVs must pay £20 per 24 hour period. Parking for up to 6 hours between 6am and 4pm is also available and charged at £8.50 whilst trailer changeovers are charged at £7 between 6am and 6pm. Prices for this are paid in the shop, and can be paid using GBP, Euros, using fuel cards or SNAP.

McDonald's: Parking and use of the McDonald's restaurant is limited to 90 minutes maximum stay and is strictly enforced by UK Parking Control.

Brewers Fayre: Parking and use of the Brewers Fayre restaurant and Premier Inn hotel is strictly for guests and customers only and you are required to provide your vehicle registration number to reception or the bar in order to receive free parking during your stay.

Premier Inn: Chargeable parking is also available in the Brewers Fayre and Premier Inn shared car park between 8am and 6pm daily and is charged at £2 for the first 2 hours and £5 for up to 10 hours. Prices are paid using the Horizon Spaces app. The location code is 5013.

Glews used to be the name of a vehicle workshop located on the old A614, before it was diverted to meet the new M62. The current service area is not signposted from the motorway, but calls itself Glews services and relies on it being visible and easily accessed.

Following the opening of the most easterly section of M62 in 1976, the workshop was acquired by Jos Richardson & Sons. They went onto add a Texaco forecourt in the 1980s as well as a Vauxhall franchise. In 1990, the Richardson family demolished the original Glews Garage and added Richwood Garage which became a Peugeot dealership.

The forecourt was significantly expanded in 1992 with the Richardson family purchasing neighbouring land to add a new convenience store and additional pumps. The site also rebranded to Shell at this point.

The forecourt and car dealerships were joined by a McDonald's drive-thru restaurant in 1997 with the restaurant proving popular with the local Goole community, gaining a McDonald's Party Bus in the car park in 1999. A Travel Inn and the Aire & Calder Brewers Fayre pub-restaurant later joined the site in 2000 creating the service area we see today. The hotel later rebranded to Premier Inn. The forecourt sales building gained an extension in 2005 adding additional sales space and new toilets. The store was also rebranded to SPAR at this point.

There were plans to add 5 business units to the south of the hotel in 2010 but these weren't built.

The old Peugeot dealership was demolished in the mid-2010s to make way for a large site redevelopment and re-alignment of the neighbouring A614. A new roundabout to accommodate the traffic for the new trade park opposite was added and new 'services' signs were placed at the entrance. Peugeot also relocated to the former Vauxhall dealership at the same time.

Jos Richardson then added a new secure HGV parking area and HGV forecourt in 2016 utilising the former sales space for the Richwood garage. The company's second Subway franchise was also added to the forecourt shop at the same time.

On 20 December 2019, the Peugeot dealership permanently closed after trading at the site for 40 years. In March 2021, EG Group applied for planning permission to demolish the car dealership, replacing it with a Starbucks Drive Thru and a KFC Drive Thru. The local authority are currently considering the plans.