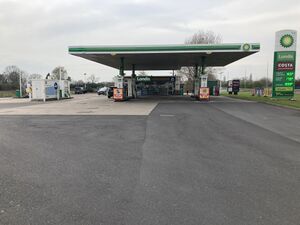 A63 westbound between the M62 and the Humber Bridge

The final service area before the start of the M62, with Beacon being the eastbound version. 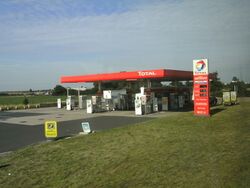 The filling station with Total branding, pictured in 2010.

West Cave and Beacon were built in the 1980s, and at the time they were closely related. Both sides offered a forecourt and a Happy Eater restaurant; on this side it was a Mobil forecourt.

Both of these restaurants became Little Chefs in 1994, and this one was named the 'South Cave West' branch.

The Little Chef restaurant closed in 2009 and was converted to an adult store whilst the forecourt was acquired by MRH in 2012 who changed it back to BP. MRH added their own-brand Hursts store to the site in 2018 before this was replaced with Londis in 2019 following their merger with MFG.