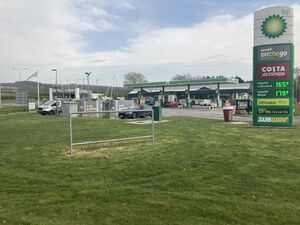 The service area is accessible in both directions but only signposted westbound.

First 2 hours free for cars and vans, after which they must pay £5 for 24 hours. No HGV parking available.

Prices are paid in store.

The filling station was first built in the late 1960s on the old A63, now Cave Road, shortly before the Elloughton Bypass opened. It was originally owned by Queens Square Petroleum and branded Total with a Londis Express store.

The site was later acquired by local forecourt operators Sewell Group in the late 1990s who were granted planning permission in 2007 to redevelop the site, introducing a new two-storey sales building with shop on the ground floor and offices on the first floor. This didn't happen and the site was rebranded to BP in 2012 following Total's nationwide shutdown.

Sewell Group eventually redeveloped the site from August to November 2015. The new forecourt opened with a much larger sales building branded as Sewell's own-branded 'Sewell on the go' store along with a reconfigured forecourt with new car and jet washes. A Subway store was later added, opening on 25 February 2016. A Revolution Self Service Launderette was also added to the site in 2018.