Unbuilt Services On The M27 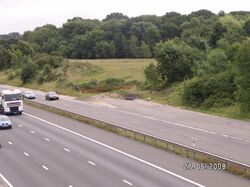 The unused exit from the planned service area.

For a list of current service areas on the M27, see Services on the M27.

The M27 was planned to run from Cadnam to Chichester. This was a length of road which, engineers decided, warranted three service stations. These were to be:

Finding these locations wasn't easy, and given the M27's closely-spaced junctions and low amount of long-distance traffic it was wondered whether any facilities were really needed at all. The search continued for political reasons: the Ministry were in a battle with Berkshire County Council over how many service areas the M4 needed, and they didn't want them to think Hampshire was getting a free pass.

Seeing as only one of those three sites was planned and never built, this page will only talk about Meon.

A cautionary note at this point: of all the half-built service areas we have examined, we have never seen one with so many names as Meon. We have seen government documentation refer to it as Meon Valley, Whiteley, Titchfield and Fareham. But the name which seemed to be used most was "Meon".

The initial proposal was for a service station in the centre of the motorway, but close to Southampton, as past experience had taught that services close to large populations are more commercially successful. In 1969 three sites were examined: an ideal site at Hamble/Bursledon (near J8, east of Blundell Lane); and two alternatives - one at J9 (Park Gate), and one east of J9 (Whiteley/Titchfield).

The J8 Hamble/Bursledon proposal was quickly dismissed as being too environmentally insensitive, as well as difficult to engineer. The J9 Park Gate proposal was also dismissed for being too small: the allocated land would have been largely filled just by the circulatory roads. It was also noted that the Ministry of Transport wanted to build a maintenance compound, and that J9 would have been the perfect place for that. Indeed the Park Gate motorway maintenance compound still exists today, albeit nestled amongst a business park.

The J9 Whiteley/Titchfield proposal was therefore the chosen site by default, despite it also raising a number of environmental concerns for its steep gradients and close proximity to the River Meon, it was still there "less emotive" option. As an added bonus, the land was conveniently up for sale just as the Ministry were enquiring about it. It involves about 17.5 acres of land.

With the ideal site already chosen, it was decided that facilities should be provided 12 miles at either side, so before those sections of the road had been finalised proposals were already afoot for a service area "between Chilworth and Nursling" and "near Emsworth".

A few years later, the precise location of the two additional services still hadn't been confirmed. This wasn't unreasonable as the route of the motorway there hadn't been either. However, it had already been suggested that such a high concentration of services on a road to be used largely by short-distance traffic may be excessive, and it was proposed that a Meon Valley services be built or greatly expanded only after the motorway had opened. 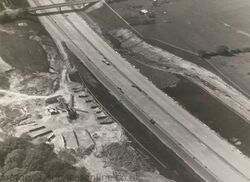 The site of the westbound services being dug out, as part of the motorway construction.

The consolidation of the three possible services around J8 and J9 in to one confirmed location came too late for the compulsory purchase order used by that part of the M27, so the planned Meon Valley service area was pursued separately. This sowed the seeds for the land identified never to be leased out to an operator.

Even so, the final design of J9 was designed with Meon Valley services in mind. Two distinctive and long slip roads were built to provide access to the new services at the same time as J9. The westbound side was designed like Washington southbound (although it's not clear whether traffic would have been able to rejoin the M27 without using the junction), while the eastbound side was designed like the original Burtonwood. Two additional 'ghost slips' marked what would have been the final accesses to the service area, ending at the point where the operator would have taken over.

A 1986 document from the Department of Transport stated that they only own the land on one side of the road at Meon, but it doesn't state which side.

The eastbound slip road into the service area (before being surfaced) was actually used during construction to allow vehicles to access the local road network, with evidence of two local road connections still visible today. They were preserved for use by the service area. The Department for Transport's half of this slip road was then used as a maintenance compound: it opened with full road markings and cats' eyes. This maintenance road was used to provide Britain's first (and only) motorway solar panel.

With hindsight the service area would have been a bad idea as traffic would have had to pass through J9, which is now very busy, but the long westbound off-slip did prove to be very useful when traffic queues back from the junction.

A further piece of evidence was removed with the opening of Whiteley in the late 1980s. Until then, traffic leaving the motorway was greeted by a sign offering two exits: one for Fareham and one for "The West, Southampton, M27". Why would traffic leaving the motorway need to know how to get back on - no other motorway exit has that? The answer is they don't, but anybody emerging from the services would have done.

A second very subtle piece of evidence can be seen when travelling east. There is a route confirmatory sign (which is supposed to be placed after every motorway entrance) positioned shortly after where traffic from the service area would have joined. It's still being maintained, even though nobody is joining the road there.

Of all unbuilt or half-built service stations, there doesn't seem to be one which has been considered more times than Meon. Effectively since 1969 it was always on the back-burner, with every list of planned service stations including "Meon" (or one of its many aliases) at the bottom. The planned opening date would be pushed back a few more years every time.

In 1992, the Department for Transport ended their involvement in service station planning. At Meon, they stated that they had "done preliminary work", and would leave it to the private sector to decide whether they wanted to take it forward. In 1994 and again in 1998 Hampshire County Council said the land at Meon Valley was allocated for a motorway service area and they would support it being used. The Whiteley Local Plan advised that planning permission would be granted for any suitable plan for a service area there.

In 1999 Esso applied for planning permission to build a large service area and hotel here. There were reports that planning permission was granted in 2001, but refusal documents dated 2003 have been found. The Esso proposal faced the wrath of residents who formed the group Residents Against Motorway Services to argue there was no need for it and that it would breach their human rights. The council argued there was no proven need for it, and that there were road safety and noise issues.

Growth at the ports at Portsmouth and Southampton meant that in 2010 the Highways Agency and Hampshire County Council wanted to address problems with a lack of HGV parking along the M27 corridor, and one of the options being considered was a new service area, which could have been the perfect spark to bring back the Meon plan.

This didn't happen, even though in 2018 the unused eastbound off-slip was thoroughly refurbished, for the first time in 43 years. A few months later, work started on the M27 smart motorway project, and the brand new road was immediately dug up. It now holds gantry posts. Most of the barriers and old cones have now been removed so the area is now more accessible than it ever was, even if it's not supposed to be. At the same time, the unused eastbound on-slip was turned into an emergency refuge area ("lay-by").

Later on in that project, Highways England removed the extra-long westbound slip road, changing it to a standard length. In a statement, Highways England said that the change was necessary because the exit was "too long", but did not offer a reason why this was a problem or why changing it would be better. The most likely explanation is that Highways England's design process for smart motorways is too simple to accommodate anything even slightly unusual.

Inevitably, after work had already started on removing the supporting infrastructure at Meon, the government announced that they needed to find somewhere to park HGVs that were heading for Portsmouth. No space was available in South Hampshire.